Solid Top-10 for Custer at Dover 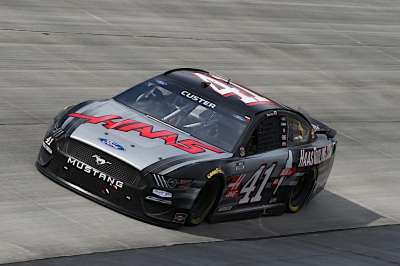 ● The No. 41 HaasTooling.com Ford Mustang started out “a tick free,” according to Custer, who picked up five positions to 25th by the competition caution on lap 35. Reporting he needed help turning when he got back on the gas at corner exit, Custer pitted for four tires and a right-rear track-bar adjustment. He restarted 22nd when the race went back to green on lap 40.

● Custer reported still being too free not long after the restart, but he climbed to 21st and held there for most of the rest of the stage. He asked for help tightening up the rear of the car as he pitted for four tires, fuel and air-pressure and track-bar adjustments during the break.

● The No. 41 HaasTooling.com Ford was handling noticeably better in the early laps of the stage, but Custer said he still could use a little help on landing the racecar in the center of the corner. He was up to 19th place and in the Lucky Dog position by lap 150, when he reported that he was “losing the front end just a little.”

● The first incident-related caution flag flew on lap 177 with Custer in the Lucky Dog position. He asked to be tightened up a bit for the short run and freed up for the longer run. He earned the free pass back onto the lead lap and pitted for four tires, fuel and slight air pressure and wedge adjustments. He restarted 18th on lap 176.

● Custer picked up a position before the end of the stage, crossing the line 17th. He said the HaasTooling.com Ford was only in need of very minor adjustments to help free it up over the long run. He pitted during the break for four tires, fuel and a track-bar adjustment.

● The No. 41 HaasTooling.com Ford climbed to 15th place by the time the second incident-related caution flag flew on lap 302. Custer had dropped a pair of positions to 18th on the restart while encountering a loose condition during the opening lap of the stage. He said the condition improved over the long run and, in fact, turned into a tight condition by the time the caution flag flew. He pitted for four tires, fuel and another slight track-bar adjustment, and restarted 15th on lap 308.

● Custer found his HaasTooling.com Ford to be tight on the restart, which led him to drop a pair of positions to 17th. The caution flag flew just six laps later, and he was called to the pits for four tires and another slight track-bar adjustment. Custer restarted 18th on lap 320.

● It was another short run to the next caution flag for debris on lap 325. Custer picked up a position to 17th while reporting his racecar felt better but needed just a bit more rear grip. He pitted for four tires and slight air-pressure adjustments and restarted 17th on lap 330.

● With his HaasTooling.com Ford “feeling pretty solid” from the drop of the green flag for the day’s final restart, Custer grabbed three positions on the opening lap. He gradually made forward progress through the end of the race, reaching the top-10 and holding onto the 10th position to the checkered flag.

● This equaled Custer’s best finish so far this season. He also finished 10th on April 25 at Talladega (Ala.) Superspeedway.

● In his three career NASCAR Cup Series starts at Dover, Custer has never finished outside the top-11.

● Alex Bowman won the Dover 400 to score his fourth career NASCAR Cup Series victory, his second of the season and his first at Dover. His margin over second-place Kyle Larson was 2.017 seconds.

● There were seven caution periods for a total of 41 laps.

● Denny Hamlin remains the championship leader after Dover with a 101-point advantage over second-place William Byron.

“I’m pretty pumped about our top-10 today. That turned out to be a pretty solid finish. It’s been pretty rough, so it feels great to have a solid result and have something to build on. The HaasTooling.com Mustang was best at the end of the race, and that’s always a good feeling. Hats off to Mike (Shiplett, crew chief) and the guys for sticking with it and giving me a good car at the end of the race. I can’t wait for COTA.”

The next event on the NASCAR Cup Series schedule is the EchoPark Texas Grand Prix on Sunday, May 23, at Circuit of the Americas (COTA) in Austin, Texas. The race begins at 2:30 p.m. EDT with live coverage provided by FS1 and SiriusXM NASCAR Radio.