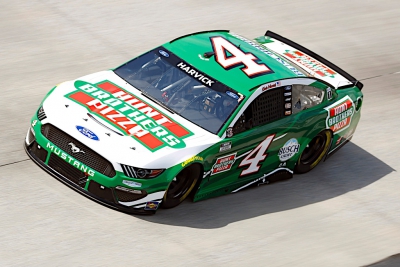 ● After starting fifth, the driver of the No. 4 Hunt Brothers Pizza Ford Mustang quickly went to work, racing to third place by lap 21.

● The competition caution flag was displayed on lap 35. Harvick made a trip to pit road for four tires and fuel. He lined up third for the restart.

● Harvick quickly grabbed second place on the restart. He spent the next several laps riding in second and trying to track down the race leader. He reported that as the run continued, the handling deteriorated, saying that the car was too loose getting into the turns and too tight in the center.

● As the laps wound down to finish the  stage, a handful of competitors caught up to the driver of the No. 4 Ford Mustang. Harvick dropped back a few positions to finish the stage in fifth place.

● The team made chassis and air pressure adjustments, changed four tires and added fuel during the caution.

● The 2014 NASCAR Cup Series champion quietly logged laps to start the second stage. He was in fifth place when the caution was displayed on lap 170. He reported that the car was decent but, as the run continued, he once again started to get too loose getting into the turns before turning tight in the center.

● The team made a round of adjustments, changed four tires and added fuel. Quick pit work placed Harvick in fourth for the restart.

● The handling issues Harvick referenced persisted through the stage, resulting in the loss of a few positions.

● Harvick finished the stage in sixth place. He reported that he needed help with the front end of the car without sacrificing rear grip. However, he did say that the previous chassis adjustment did seem to help the car turn better, but that the car still needed more work.

● After an aggressive restart, the No. 4 Hunt Brothers Pizza Ford Mustang driver settled into a comfortable pace in sixth place.

● Harvick made a pass to take over fifth place on lap 275. He reported that he needed help getting the car to turn from the center of the turn to the exit.

● Once again, the handling on the No. 4 machine started to go away the longer the run went on. Harvick reported on lap 295 that the car was plowing in the front.

● Caution was displayed on lap 301 with Harvick in fifth place. He reported that he needed the car to turn better from the center of the turns to the exits.

● Harvick made a trip to pit road for four tires, fuel and a chassis adjustment. He lined up fifth for the restart.

● Harvick was quick to the pedal for the restart and was able to pick up fourth place. A quick caution was displayed for a single-car accident on lap 315. With only a handful of laps on the tires, the team elected to stay out, placing Harvick in fourth for the restart.

● Once again, Harvick made full use of his restart capabilities to take over third place. Handling issues prevented him from maintaining the position and he dropped back to fourth.

● A caution slowed the race on lap 326. Again, the leaders stayed on the track, which placed Harvick in fourth for the restart on lap 331.

● Harvick quietly went to work logging laps as the race drew to a close. He surrendered two positions before the checkered flag waved to finish the day in sixth.

●  Harvick’s 22 top-10s at Dover are the most among active drivers.

●  This was Harvick’s seventh straight top-10 at Dover.

●  This was Harvick’s fourth straight top-10. He finished fourth on April 25 at Talladega (Ala.) Superspeedway, second May 2 at Kansas Speedway in Kansas City, and sixth in the series’ prior race at Darlington (S.C.) Raceway.

●  Alex Bowman won the Dover 400 to score his fourth career NASCAR Cup Series victory, his second of the season and his first at Dover. His margin over second-place Kyle Larson was 2.017 seconds.

●  There were seven caution periods for a total of 41 laps.

●  Denny Hamlin remains the championship leader after Dover with a 101-point advantage over second-place William Byron.

The next event on the NASCAR Cup Series schedule is the EchoPark Texas Grand Prix on Sunday, May 23 at Circuit of the Americas (COTA) in Austin, Texas. The race begins at 2:30 p.m. EDT with live coverage provided by FS1 and SiriusXM NASCAR Radio.