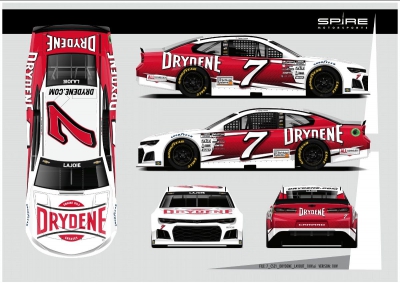 Drydene Performance Products, an American-owned and -operated company, is headquartered in Warminster, Pennsylvania. Drydene’s reputation as the “hardest working brand in heavy-duty lubrication” is backed up by a complete line of automotive, commercial, and industrial lubricants, including engine oils, diesel exhaust fluid (DEF), transmission fluids, grease, and hydraulic and gear oils.  From grassroots to NASCAR, Drydene is also known for its love and support of all levels of racing.

“We are excited to have Corey continue to be a part of Team Drydene for a third consecutive year and also partnering with Spire Motorsports for the Drydene 400 race at Dover International Speedway,” said Dave Klinger, President of Drydene Performance Products. “Corey is an amazing competitor on the track and a true Drydene brand ambassador off of it. Everyone at Drydene is looking forward to seeing Corey drive the No. 7 Drydene Camaro and hopefully parking it in victory lane.”

LaJoie’s association with Drydene dates back to 2019 during his time in the cockpit of the No. 32 entry for Go FAS Racing.

LaJoie announced his move to Spire Motorsports in November 2020 and has made 12 starts for the Concord, N.C., organization this season. He jump-started the 2021 campaign with a spirited ninth-place showing at the season-opening Daytona 500. In recent weeks, the 29-year-old has logged a trio of top-25 finishes, including a just-miss top 20 at Richmond Raceway where he came home 21st.

He picked up his third top 25 of the season last weekend following a solid 22nd-place showing at Darlington Raceway in the Goodyear 400 during the Official Throwback Weekend of NASCAR. While he may not have won the race, LaJoie’s Alan Kulwicki inspired throwback paint scheme was the talk of the sport and given high praise throughout the weekend by competitors, broadcasters and industry insiders alike.

LaJoie has seven previous NCS Dover starts and logged nearly 2,200 laps on NASCAR’s senior circuit at the “The Monster Mile.” He is currently 30th in points 12 races into the 2021 schedule, just nine points back from 29th.

“It’s great to have Drydene back on board this weekend at Dover International Speedway,” said LaJoie. “Drydene has been a great supporter of mine over the years, so I’m proud to continue that relationship after making the transition to Spire Motorsports. As the entitlement sponsor of both the NASCAR Cup Series and NASCAR Xfinity races this weekend, it’s obvious Drydene is committed to our sport. I can’t thank Drydene enough for continuing to invest in both NASCAR and my career. We’re looking to put a good run together on Sunday at the Monster Mile.”

“We’re proud that Drydene thought enough of Spire Motorsports to join Corey for another year when he signed with our team,” commented Spire Motorsports co-owner T.J. Puchyr. “We’re still a very young team and this is our first year running two cars, but we’re making gains every week. Corey has proven that he knows his way around Dover and can get the job done. We know he’ll do a good job for Drydene on Sunday.”

The Drydene 400 from Dover International Speedway will be televised live on FS1 Sunday, May 16 beginning at 2 p.m. Eastern Daylight Time. The 13th of 36 races on the 2021 NCS schedule will be broadcast live on the Motor Racing Network and SiriusXM NASCAR Radio Channel 90.