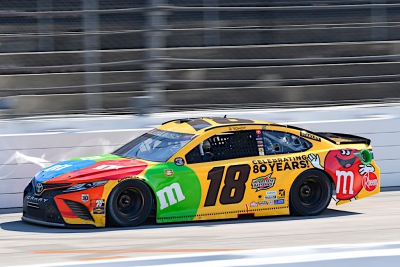 ● The first caution waved on lap six for a single-car accident. Busch reported that the M&M’S 80th Anniversary Toyota Camry was “on the splitter.”

● Busch lined up fourth for the restart on lap 13 and took over the top spot two laps later. He maintained the lead for a handful of laps before teammate Martin Truex Jr. caught up to him and made the pass for first. Busch had a tire go down as this was taking place, causing the No. 18 to make contact with the outside retaining wall. Busch was able to maintain control of the car and get to pit road for new tires as NASCAR displayed the caution.

● The two-time NASCAR champion lined up 36th for the restart on lap 28.

● Green-flag pit stops started taking place on lap 60, with Busch making his own stop on lap 62 for four tires and fuel. Green-flag stops cycled through on lap 70 with Busch in 23rd place.

● Busch spent the last 20 laps of the first stage racing back into the top-20. He was scored in 16th at the end of Stage 1. He reported that the car continued to get loose as the race continued. The team elected to make chassis and air pressure adjustments, change four tires and add fuel during the caution.

● The driver of the M&M’S 80th Anniversary Toyota Camry quietly went to work to start the second stage. He was up to ninth place during the early laps of Stage 2, which was slowed twice for two separate single-car accidents. The majority of the field made a trip to pit road during the fifth caution, including the No. 18 team. It was four tires and fuel, and then Busch lined up seventh for the restart.

● Busch was in third place when green-flag pit stops started taking place on lap 140. He noted that the car was too loose in the middle of turn four. The team made an air pressure adjustment, changed four tires and added fuel. He reassumed the third position by the time green-flag stops cycled through.

● As the second stage drew to a close Busch was able to catch the second-place driver and make the pass for the position. He noted that the rear tires lacked compression, creating a loose condition.

● He maintained the second spot the first several laps of the final stage but noted that the car was still on the loose side.

● Green-flag pit stops started taking place on lap 223. The No. 18 M&M’S 80th Anniversary Toyota team made their stop on lap 224 for four tires and fuel.

● As the race continued, the loose-handling issue persisted. Busch was passed for second on lap 240 and noted the handling issue.

● The final round of green-flag pit stops started on lap 255, with the No. 18 team making their stop on lap 257 for an air pressure adjustment, four tires and fuel. Busch was back to third place by the time stops cycled through.

● As the laps wound down, Busch radioed to crew chief Ben Beshore that the last adjustment helped on the front end of the run, but his M&M’S 80th Anniversary Toyota ended up loose later in the run. Still, he brought home a solid third-place finish.

“Solid day overall with our M&M’S 80th Anniversary Toyota. Definitely better than some of our other 750 package races, but just missing a little bit on the long run. It seemed like we could fire off with (Martin) Truex there and hang with him a little bit. Actually, we would catch him for about five laps, and then it was over. Just trying to hold on after that point. Overall, real good day. I’m real proud of Ben (Beshore, crew chief) and the guys. We’ve been doing a lot of work on some stuff. We’ve been talking a lot and communication is going well. It seems like we are getting a little bit better overall, clicking as a group, which is good. We can build on this momentum here and hopefully take it on into Nashville, which is a similar package racetrack as this one. Good day, good effort. This M&M’s Camry was fast. Thanks to Interstate Batteries, Rowdy Energy as well.”