Harvick Grits Out a Top-10 at Gritty Darlington 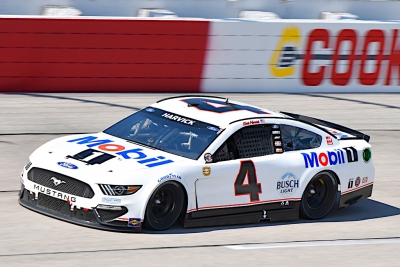 ●  Harvick put the No. 4 Mobil 1 Ford Mustang into the lead after only five tours around the 1.366-mile oval, passing polesitter Brad Keselowski

●  Kyle Busch passed Harvick for the lead on lap 14 and then Martin Truex Jr., got by to take second on lap 18.

●  “The front doesn’t turn and I have zero rear grip,” said Harvick after dropping to third.

●  Caution on lap 23 allowed Harvick to pit for four tires, fuel and a right-rear chassis adjustment.

●  Tyler Reddick passed Harvick for second on lap 41, whereupon Harvick keyed his mic and said, “You gotta take a big swing at the loose.”

●  Harvick fell to fourth on lap 45 as Denny Hamlin got by. “Like, I mean, a big swing,” said Harvick again about addressing the loose-handling condition of his racecar.

●  Made scheduled, green flag pit stop on lap 59 for four tires and fuel with another right-rear chassis adjustment.

●  After pit stops cycled through by lap 75, Harvick was back in third place.

●  Fell to fifth place by the end of the stage. “Front doesn’t turn,” said Harvick. “It runs five laps and then just gives up and we’re sideways.”

●  Pitted for four tires and fuel with another right-rear chassis adjustment upon the conclusion of the stage.

●  A flurry of cautions kept the No. 4 Mobil 1 Ford Mustang in fifth at the beginning of the stage. “Tight in traffic,” said Harvick.

●  Harvick took advantage of a caution and pitted for four tires and fuel on lap 111. Lined up 10th for lap-115 restart as not everyone opted to pit.

●  “Literally plowing,” said Harvick about his racecar before dropping to 13th on lap 119.

●  Made scheduled, green flag pit stop on lap 147 for four tires and fuel with a track bar adjustment.

●  Picked up two spots at the end of the stage to finish 12th.

●  “When I try to run high, I can’t put the power down because I’m too loose,” said Harvick upon the conclusion of the stage.

●  Pitted for four tires and fuel with a right-rear wedge adjustment at the end of the stage.

●  Harvick held the No. 4 Mobil 1 Ford Mustang steady in 10th until making a scheduled, green flag pit stop on lap 225.

●  The No. 4 Mobil 1 Ford Mustang took on four fresh tires, fuel and a right-rear wedge adjustment during that stop.

●  Harvick returned to 10th place once pit stops had cycled through.

●  Made scheduled, green flag pit stop for four tires and fuel with another right-rear chassis adjustment on lap 256.

●  Picked up two spots on pit road to return to the track in eighth and picked up another two positions in final 30 laps to finish sixth.

●  Harvick earned his ninth top-10 of the season and his 16th top-10 in 27 career NASCAR Cup Series starts at Darlington.

●  This was Harvick’s third straight top-10. He finished fourth on April 25 at Talladega (Ala.) Superspeedway and second in the series’ prior race at Kansas Speedway in Kansas City.

●  This was Harvick’s 11th straight top-10 at Darlington.

●  Since joining Stewart-Haas Racing in 2014, Harvick has never finished outside the top-10 at Darlington. He also scored two of his three Darlington wins during this time.

●  Harvick led twice for 10 laps to increase his laps led total at Darlington to 792.

The next event on the NASCAR Cup Series schedule is the Dover 400 on Sunday, May 16 at Dover (Del.) International Speedway. The race begins at 2 p.m. EDT with live coverage provided by FS1 and SiriusXM NASCAR Radio.