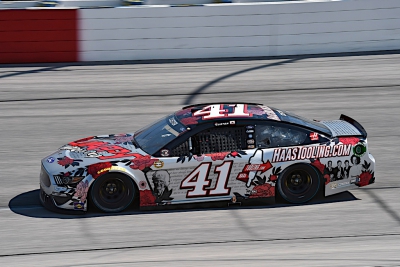 ● Despite the No. 41 HaasTooling.com Mother’s Day Ford Mustang starting off loose, Custer broke into the top-15 by lap 12 and stayed there until the competition caution.

● Under the lap-22 competition caution, the team pitted for four tires, fuel and a slight wedge adjustment to try and combat their free racecar.

● Custer reported on lap 45 that his Ford Mustang was so loose it was “out of control”, so the team brought him down pit road on lap 50 earlier than scheduled for a green-flag pit stop for four tires, fuel and a track bar adjustment.

● When green-flag pit stops cycled through, the No. 41 HaasTooling.com Mother’s Day Ford Mustang was 18th, but it was still handling loose, causing Custer to fall off the lead lap and lose spots as the first stage came to an end. He ended up 27th.

● At the end of the first stage, Custer reported that the car “wasn’t like anything he’s had before” because of how free it was handling. The team opted to pit during the break for four tires, fuel and a wedge adjustment.

● The No. 41 HaasTooling.com driver was involved in an accident with the No. 38 on lap 97 of the Goodyear 400. The damage sustained to his Ford Mustang was too much to continue the race and ended Custer’s day at Darlington.

“They all checked up in front of me and just turned down into me. I didn’t have anywhere to go. It’s really frustrating. We wanted to give Margaret Haas a really good run in our Mother’s Day car. It just didn’t work out for us. We’ll move on to the next one. We were really looking forward to this race, but it didn’t go in our favor. It’s so slick out there. It’s pretty crazy. That’s the slickest I’ve ever seen Darlington. We were just struggling, and we couldn’t really find the balance on the car.”