Spire Motorsports to Pay Tribute to Kulwicki in Goodyear 400 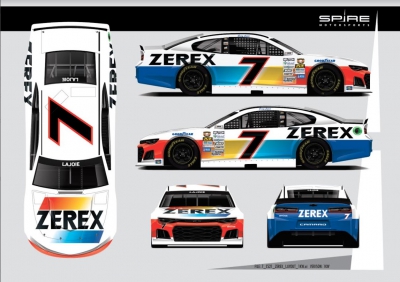 Alan Kulwicki collected victories while representing the Zerex brand at the 1988 Checker Auto Parts 500 at Phoenix (Ariz.) Raceway and the 1990 AC-Delco 500 at North Carolina Motor Speedway in Rockingham, N.C.

The Official Throwback Weekend of NASCAR is beloved by the entire NASCAR industry for paying homage through special paint schemes to NASCAR Hall of Famers, legends, team owners and valuable sponsors across the history of the sport.

“We at Valvoline were thrilled to hear that Spire Motorsports was honoring Alan Kulwicki with this Zerex paint scheme,” said Patrick Daugherty, Associate Brand Manager, Sponsorships, Valvoline. “Alan had an incredible career with us back in the late ‘80s and early ‘90s.  We’re excited to see Corey LaJoie wheel this Zerex hotrod at Darlington.”

Spire Motorsports purchased the assets of Leavine Family Racing last October, which included Kulwicki’s former race shop and serves as the headquarters of its two-car team.

LaJoie has six previous NCS starts at the “Track Too Tough To Tame” dating back to 2017 and has completed just over 90 percent of the laps contested over that span. He is currently 30th in points 11 races into the 2021 campaign.

“I’m really excited to get to Darlington Raceway this weekend with our Zerex Chevy Camaro and honor Alan Kulwicki,” said LaJoie. “Darlington is one of the staples on our schedule. It’s really cool to go back there on Mother’s Day for the throwback weekend. We’re going there with a low-downforce, high-horsepower package so we’ll be slipping and sliding around like we did back in 2017. We should put on a good show for the fans. I’m excited to continue showing what we’re capable of. Hopefully, we can start putting some results on the board for Spire Motorsports. We’ve run a lot better than our results show and we’ll continue building on that at Darlington this weekend.”

“It’s really an honor for us to run this paint scheme and celebrate Alan Kulwicki during NASCAR’s Official Throwback Weekend,” added Spire Motorsports co-owner T.J. Puchyr. “We’re very grateful to the folks at Valvoline for supporting our efforts to honor one of NASCAR’s most influential champions. Back in November, when we announced that we were going to expand to two cars and operate out of Alan’s former shop, I said we weren’t taking the responsibility that comes with racing the No. 7 out of that shop lightly. I think this paint scheme demonstrates that commitment.”

The Goodyear 400 from Darlington Raceway will be televised live on FS1 Sunday, May 9 beginning at 3:30 p.m. Eastern Daylight Time. The 12th of 36 races on the 2021 NCS schedule will be broadcast live on the Motor Racing Network and SiriusXM NASCAR Radio Channel 90.