Newman Battles Back to 16th in 700th Cup Start 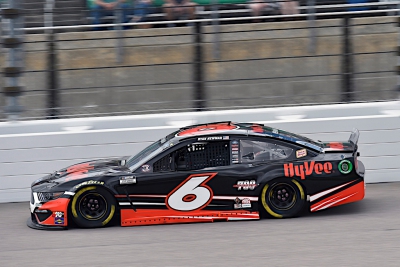 In his 700th NASCAR Cup Series start, Ryan Newman overcame an early penalty and fought his way back to a 16th-place finish Sunday afternoon in the Hy-Vee Ford at Kansas Speedway.

After no natural cautions in the opening two stages, the final stage saw four, including two in the final 15 laps. Newman rolled off 14th in the 267-lap race, his 31st at the 1.5-mile speedway.

The 43-year-old ran 18th at the time of the competition caution at lap 25 as the team began fine-tuning his Ford Mustang. Just after his first pit stop of the afternoon he was assessed a pass-through penalty for body modifications, one that would force him to hit pit road once the race went back green.

Following the penalty he finished the opening stage in 31st as he and the team began the climb back to the lead lap. He was in the lucky dog position midway and near the end of stage two, but a caution never flew as he remained 31st to end the second 80-lap segment.

After staying out in the final stage break, Newman restarted one lap down and would have to pit not long into the final stage. That came at lap 191 when he hit pit road, in a sequence that saw a loose tire get away in another stall and settle in the infield grass. Despite it staying there 25-plus laps, the caution didn’t initially fly, but did later at lap 228.

Newman took the wave around in that sequence and would restart 24th at lap 235, before ultimately being in position for the free pass with 15 to go, when the first of two final yellows was displayed. After getting back on track, he maneuvered through the closing laps to bring the Hy-Vee Ford home in 16th.

NASCAR heads to Darlington Raceway next weekend for its annual Throwback race. Race coverage is set for 3:30 p.m. ET on FS1 and MRN, and coverage can also be heard on SiriusXM Channel 90.