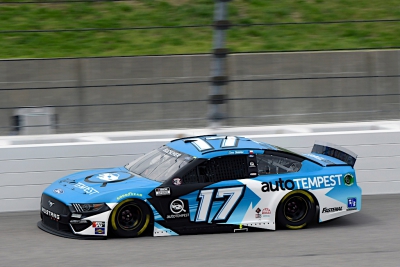 After leading 13 laps Sunday afternoon at Kansas Speedway, Chris Buescher and the No. 17 AutoTempest Ford team finished eighth to secure their second top-10 of the season.

“It was a good ending for our Autotempest Ford Mustang,” said Buescher. “It was a fight all day and we worked hard at it, everyone did a good job and brought us home a top-10. Really respectful finish from where we started. We kept getting better, kept working on it. Kansas is always fun being able to move around and have options. Those late race restarts were pretty wild, but we came out of it in one piece, the car is clean. Glad to give AutoTempest their first top-10 in NASCAR.”

Buescher rolled off the grid in 16th and maintained track position for the majority of the first stage of racing. The team’s only pit stop of the stage came at lap 25 with the competition caution where they took four tires, fuel and an air pressure adjustment to tighten up the Ford Mustang. After completing 49 laps of racing, the driver reported that his No. 17 machine needed more security around the top. The team took the green-white checkered for stage one in 17th.

At the stage break, Buescher pitted for four tires, fuel and more adjustments to free up his car. The team restarted 18th on the top lane and toggled between 18th and 19th as he continued battling a tight handling Ford. The Prosper, Texas native finished stage two in 19th and one lap down, but earned the free pass to get his lap back.After pitting for service the team restarted 19th. Buescher maintained track position and steadily worked his way up through the field. With 61 laps to go, he reported that the car’s balance was better.

Green flag pit stops began to cycle through and soon the driver took the lead, holding on to it for 13 laps before pitting with 42 to go, as a caution flew just after. Buescher was running 20th and a lap down at the time of the break, but gained his lap back with the wave around.

The driver restarted 19th with 32 to go and had made his way up to 18th when another caution came out. The team elected to pit for four tires, a track bar adjustment and fuel before heading back on track in 18th.

A few more late-race caution flags waved and the No. 17 team stayed out on track, restarting 11th with two to go. During a crazy two laps, the driver was able to work his way through the field earning three spots to take the green-white checkered flag in eighth. The finish marks Buescher’s second top-10 of the season, the first coming in March at Atlanta.

Buescher and the No. 17 team return to action next Sunday, April 9 at Darlington Raceway at 2:30 p.m. EST on FS1, MRN and SiriusXM Channel 90.