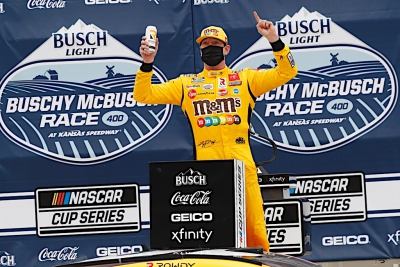 ● The M&M’S MIX driver quietly went to work from the drop of the green flag. He was in fifth place by lap 10 and fourth by lap 20. He reported that other than a slightly tight condition at the exit of the turns, the car was well balanced.

● Busch was in fourth place when the competition caution was displayed on lap 25. He reported that the tight-handling issue at the exits of the turns continued to be an issue. The team elected to make a chassis adjustment, change four tires and add fuel. He restarted the race in sixth place.

● The tight-handling issue on the No. 18 M&M’S MIX Toyota Camry persisted as the first stage continued. Busch was in fifth place on lap 50 when he noted that the car was too tight, which prevented him from being able to pull up to the car in front of him.

● As the first stage came to a close, Busch started to make some aggressive moves. He was up to second place by lap 75, and two laps later he took over the top spot.

● Busch maintained the lead to secure the stage win.

● The team elected to make a minor air pressure adjustment, change four tires and add fuel during the caution.

● After starting third Busch quickly jumped to second place. He stalked the race leader during the next several laps.

● Busch noted on lap 100 that the M&M’S MIX Toyota had started to lose overall grip.

● Green-flag pit stops started taking place on lap 120, with Busch making his own trip to pit road on lap 122 for an air pressure adjustment, four tires and fuel.

● The two-time NASCAR Cup Series champion was in sixth place on lap 139 when he reported that the car was handling a little on the free side to start the latest run, but that it continued to get tight as the race continued.

● Busch finished the second stage in second place. The team made chassis and air pressure adjustments, changed four tires and added fuel during the break.

● The Las Vegas native was in third place on lap 200 when he reported that the balance on the M&M’S MIX Toyota Camry was pretty good. The car was a bit snug in the front of the car, but overall, the handling was positive.

● Green-flag pit stops started taking place on lap 210. The No. 18 team surrendered third place to make a stop on lap 212 for four tires and fuel.

● Caution was displayed on lap 229 for debris. Busch was running third when he reported that he needed something to get the car off the splitter. The team elected to make a series of adjustments in the hopes of being able to contend for the win – adjusting the track bar and air pressure, changing four tires and adding fuel.

● Busch lined up third for the restart on lap 236.

● Caution was displayed on lap 244 with Busch in second place. He reported that the balance was better but he could use another adjustment. Approximately seven drivers, including Busch, elected to stay out during the caution while the rest of the field made stops for fresh tires. Busch lined up second for the restart with less than 20 laps to go.

● Busch was in second when caution was displayed on lap 252 for a single-car accident. With so few laps to go, the team elected to stay out, placing Busch in second place for the restart with 10 laps to go.

● A push from the car behind enabled Busch to take over the top spot as an accident unfolded farther back in the running order. This forced the seventh caution on lap 257.

● The field lined up behind Busch for the restart with three laps to go. A big push from teammate Martin Truex Jr. enabled Busch to jump out on the first lap. He maintained the position to the checkered flag.

What does it mean to get back to victory lane with the ups and downs you’ve faced both personally and professionally in recent months?

“You talk about ups and downs of racing – there have been a lot of downs of life for us. I have a great opportunity and a great job, no doubt. But struggling with the infertility and stuff like that with Samantha (Busch, wife). Hey to Samantha and Brexton (son) back home. It was just a great day to be able to put this M&M’s MIX Camry up front. I want to thank Hy-Vee, our retail partner. They did a huge promotion for us this year with M&M’S and Rowdy Energy. It’s cool to get everybody back to victory lane again this early in the season. To be able to get some of those points going our way now and hopefully – heck, I just remembered, the Buschy McBusch race. The Busch won it, what do you know, right on.”

How do you remain focused when you’re dealing with struggles outside of the racecar?

“It’s hard sometimes. When you go through the lows, you go through the disappointment, you go through the dejection and the non-understanding of just whether or not you can still do it. There’s a sense of doubt there, for sure. You just have to keep persevering, keep digging and putting your focus forward to be able to come out here and win this thing. Thanks to all of the fans here at Kansas Speedway. It’s awesome to have people back and you guys coming out and supporting us for what we can do with the rules right now. Thanks to my team, everybody at Toyota, TRD – the M&M’S Camry was awesome today. Ben Beshore, it’s his first win as a crew chief. Happy for him, happy for my guys – let’s celebrate.”

● Busch earned 10 bonus points and a playoff point by winning the first stage. He picked up an additional nine bonus points with his second-place finish in the second stage and five playoff points for the win.

● Busch celebrated his 36th birthday today. This is the second time he has won on his birthday, having won at Richmond International Raceway in 2009. He joins NASCAR Hall of Famer Cale Yarborough as the second Cup driver to win multiple times on their birthday.