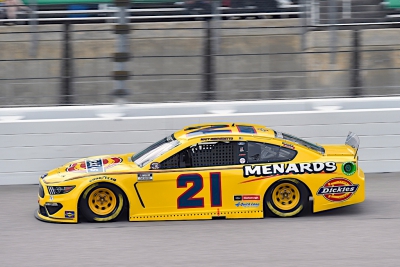 Matt DiBenedetto steered his No. 21 Dickies Apparel/Menards Mustang through some late-race mayhem to finish fourth in Sunday’s Buschy McBusch Race 400 at Kansas Speedway. It was his second-straight top-five finish and his third-consecutive top-10, and he leaves Kansas 16th in the Cup Series standings after being 37th following the second race of the season.

DiBenedetto and the Dickies Apparel/Menards Mustang started fifth in Sunday’s 400-miler, but for much of the early going he struggled to run with the leaders. He finished both Stages outside the top 10 but as the Wood Brothers crew continued to tune the No. 21 Mustang, he was able to drive his way back into the top 10 in the third segment of the race.

The first 230 laps of the race saw no caution flags for incidents on the track, but there were four in the final 37.

DiBenedetto was able to capitalize on the late restarts, even as drivers around him had four fresh tires to his two in the final 20 laps.

He saved his biggest move for the final two-lap shootout. He lined up seventh for the green flag, was sixth at the white flag then came home fourth.

The restarts at the end were insane, which is pretty normal for Kansas,” DiBenedetto said in his post-race press conference. “It’s kind of like superspeedway racing on the restarts, and it gets messy at the end.

“I’m glad we survived them. I’m glad we were on the bottom lane, which I don’t say much, but at the end it worked out because they got all jumbled up and about crashed up top there, so it worked out.

“We were in the right spots and tried to be smart all day.”

DiBenedetto, who scored his best-ever finish at Kansas and the best there for the Wood Brothers since Ryan Blaney finished third in the fall of 2017, said the Dickies Apparel/Menards team worked hard all day.

“These are the races that you’re super proud of because we didn’t have a fourth-place car,” he said. “We were really having to fight to be around that top 10 area at all, [and] execute and get the car better throughout the day.”

He said the turn-around after a disappointing start to the season is heartening.

“I knew we had the strength of the team after such a rough start to the season,” he said, adding that circumstances outside the team’s control were a problem early on. “It’s amazing to come back like this, so it just shows that momentum can go one way or another, and when it clicks and you get on a roll it can go well.

“I’m just really proud of the team. Nobody ever got down during those times when it was a rough start, and we’re really rebounding.

Next up for DiBenedetto and the No. 21 team is next Sunday’s Goodyear 400 at Darlington Raceway.