Top-20 Run for Briscoe at Kansas 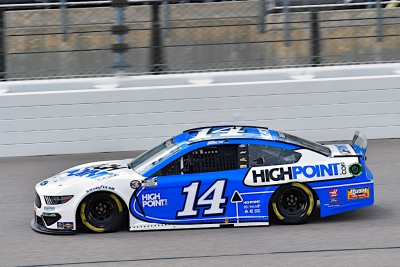 ● At the lap-25 competition caution, Briscoe reported the HighPoint.com Ford Mustang was too loose in the back end and lacking straightaway speed. The team pitted for four tires, fuel and a chassis adjustment, and Briscoe restarted in the 33rd position after dropping to the tail end of the longest line to serve a pit road speeding penalty.

● Briscoe worked his way forward to sit 26th when the first stage ended on lap 80. Though the previous adjustments were an improvement, the HighPoint.com Mustang was still too free in the back and the front end was tightening up.

● Crew chief Johnny Klausmeier brought his driver to pit road for four tires, fuel and additional adjustments, and Briscoe lined up 24th for the beginning of Stage 2.

● On lap 119, Briscoe entered the top-20 after starting the stage in 24th on lap 87. The next laps, cars began making scheduled green-flag pit stops and the HighPoint.com Ford Mustang moved into the eighth position.

● Briscoe made his green-flag stop on lap 121, receiving four tires and fuel with no adjustments after reporting he was happy with the balance of the No. 14. He returned to the track in 26th, one lap down to the leaders.

● With the laps winding down in Stage 2, Briscoe slowly advanced back into the top-20 and was scored 20th when the green-and-white checkered flag waved signaling the end of the stage.

● At the stage break, Briscoe pitted for four tires, fuel and adjustments for the HighPoint.com Ford Mustang, which had gotten loose over the long green-flag run.

● Briscoe began the final stage in 24th after a handful of cars waved around to rejoin the lead lap but dropped back to 30th after the No. 23 nearly made contact with the wall in front of him on lap 170.

● By lap 204, the No. 14 was back in 25th, and Briscoe continued to make up ground as the field approached the next scheduled green-flag stop.

● The HighPoint.com team made its final scheduled green-flag pit stop on lap 213 for four tires, fuel and a wedge adjustment. The No. 14 started off the stage too loose, but the handling had improved.

● Briscoe weathered four incidents that brought out the caution flag over the final 36 laps of the race. He lined up 21st and on the lead lap for the final restart on lap 265 and picked up one position before taking the checkered flag.

● Briscoe earned his fifth top-20 finish of his rookie season.

● Denny Hamlin remains the championship leader after Kansas with an 87-point advantage over second-place Truex.

“Today ultimately turned out good for us. The HighPoint.com Ford guys fought all day to get us back in a position to get back on the lead lap, and the cautions fell the right way for us at the end. We still have some work to do, but we definitely found something we can build on at these mile-and-a-half tracks.”