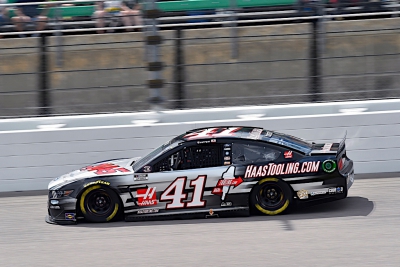 ● The HaasTooling.com Ford held its relative starting position during the intial laps but then began losing ground during the run to the lap-25 competition caution, by which time Custer was in 20th place. He said his racecar “fired off tight, but then loose, mainly on entry” was the problem thereafter. He pitted during the competition caution for four tires, fuel and a track-bar adjustment. He restarted 15th when the race went back to green on lap 30.

● Custer found himself dealing with a tight condition in corner center through the remainder of the stage, losing 10 positions along the way. He said he also was struggling on corner entry, aerodynamics-wise, which compounded the tight in corner center condition. He took four tires and fuel, packer was removed from both sides, and spring rubber was added to the right rear during the stage break.

● The HaasTooling.com Ford Mustang was improved during the initial laps of the stage after the huge changes during the break, but Custer said it could use “much more of the same.” He held his relative position until the field began green-flag pit stops on lap 120. He was as high as fifth place while stretching his fuel run, then finally pitted from ninth on lap 140. He took fuel and right-side tires only and resumed in 30th place.

● Custer picked up two positions in the final 20 laps of the stage and said he most needed help on corner entry without making the tight in corner center condition worse. He pitted for four tires, fuel and air-pressure adjustments during the break.

● The No. 41 HaasTooling.com Ford Mustang was “way better” at the outset of the stage, as Custer reported on the radio, saying he had plenty of rear grip for the time being. By lap 200, while running 27th, he said the grip had “fallen off a ton.” He was the first to pit under green on lap 205, when he took four tires, fuel and adjustments to remedy his right-rear grip issues.

● The first incident-related caution flag of the race flew on lap 245 for debris on the frontstretch. Custer stayed on track to gain one of his two laps back and restarted 25th on lap 235.

● The second incident-related caution flag flew on lap 245 for a car into the turn-one wall with Custer running 28th. He pitted this time for four tires, fuel and “huge air pressure adjustments” to stabilize the rear of the car on corner entry He restarted 27th on lap 249.

● A two-car incident on the backstretch brought out the caution just four laps later. Custer stayed on track and restarted 24th on lap 257.

● Yet another caution flag flew on lap 259 for a three-car incident on the backstretch with Custer running 25th. He restarted 23rd and in the Lucky Dog position on lap 265, eventually finishing 24th.

●  Kyle Busch won the Buschy McBusch Race 400 to score his 58th career NASCAR Cup Series victory, his first of the season and his second at Kansas. His margin over second-place Kevin Harvick was .336 of a second.

“Kansas is probably the trickiest mile-and-a-half (oval) we go to, and we just had a tough time shaking a condition where we couldn’t get good corner entry. That, combined with being tight in the center of the corner that we just couldn’t improve on over the long haul, it made for a pretty frustrating day. We just have to keep working hard and do everything we can to be better the next time.”