Harvick Claws His Way to Second at Kansas 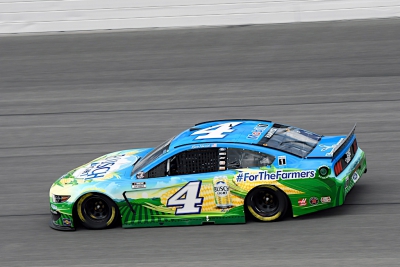 ●  Grabbed third right at the start.

●  “Car won’t turn and loose in,” said Harvick while running third on lap 14.

●  Harvick fell to fifth on lap 17 as both Christopher Bell and Kyle Busch got by.

●  “I’m going to have to have some rear grip,” said Harvick shortly after the competition caution came out on lap 25.

●  Pitted for four tires and fuel with a right-rear chassis adjustment on lap 28.

●  Harvick and the No. 4 Busch Light #ForTheFarmers Ford Mustang lined up fourth for the lap-31 restart.

●  “Super tight on exit and loose in,” said Harvick as Chase Elliott grabbed sixth on the final lap of the stage.

●  Passed Ryan Blaney for seventh on lap 96 and then got by Tyler Reddick on lap 99 to take sixth.

●  Made scheduled, green flag pit stop for four tires and fuel on lap 121.

●  “Just lost the back (of the car) on that run,” said Harvick as he finished the stage in 10th. “I thought we were better the run before.”

●  Pitted for four tires and fuel at the conclusion of the stage. The crew delivered a fast stop, gaining Harvick four positions.

●  The No. 4 Busch Light #ForTheFarmers Ford Mustang cracked the top-five on lap 169.

●  “It’s a lot better, but I’ve started to lose the back (of the car) the last couple of laps,” said Harvick on lap 206 while in fourth place.

●  Harvick on lap 209: “From the back to the front, the whole car has just lost grip.” Nonetheless, he maintained fourth.

●  Made scheduled, green flag pit stop for four tires and fuel with a right-rear chassis adjustment on lap 214.

●  Harvick returned to fourth place on lap 227 once pit stops cycled through.

●  Caution on lap 230 allowed Harvick to pit for four tires and fuel with a right-rear chassis adjustment.

●  An uncontrolled tire during the pit stop sent Harvick to the tail end of the longest line for the lap-236 restart. He lined up 20th.

●  Harvick took advantage of the caution and pitted for four tires and fuel on lap 246. He was 12th for lap-250 restart.

●  Was 12th when the caution flag waved for another single-car accident on lap 253.

●  Harvick had clawed his way back to seventh by the time a multicar crash bought out the caution on lap 259.

●  Harvick crossed the stripe second in a green-white-checkered finish. The driver of the No. 4 Busch Light #ForTheFarmers Ford Mustang used his fresher tires to his advantage while many of the front-runners slid into one another and the wall in the final dash to the checkered flag.

●  This was Harvick’s second straight top-five. He finished fourth in the series’ last race at Talladega (Ala.) Superspeedway.

●  This was Harvick’s third straight top-five at Kansas.

●  This was Harvick’s best finish so far this season. His previous best result was fourth, earned twice (season-opening Daytona 500 and last Sunday at Talladega.)

●  Kyle Busch won the Buschy McBusch Race 400 to score his 58th career NASCAR Cup Series victory, his first of the season and his second at Kansas. His margin over Harvick was .336 of a second.

●  There were seven caution periods for a total of 36 laps.

●  Twenty-two of the 39 drivers in the Buschy McBusch Race 400 finished on the lead lap.

“We had the right pit strategy once the cautions came out there. We had the pit road penalty and came in for tires and Rodney (Childers, crew chief) made a great call of coming back in to put tires on and that kind of put us on the offense. We were able to be really aggressive on the two restarts we had at the end and were able to make up some ground. Everybody on our Busch Light #ForTheFarmers Ford Mustang did a great job today of just hanging in there. We made a few mistakes, but we made our car better throughout the whole day and were more competitive than we had been in the last couple mile-and-a-half races.”