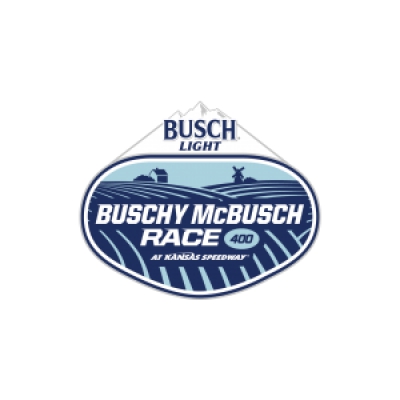 The 400-mile race at Kansas ultimately came down to a two-lap shootout to the finish.  Kyle Busch came out of this restart victorious, only leading a total of 20 laps throughout the race. The win marks his first of the 2021 season and his second career Cup Series win at Kansas. Notably, Busch continues his streak of winning any Cup Series race he has competed in on his birthday.

“Talk about the ups and downs of racing. It has been a lot of downs of life for us. I have a great opportunity and a great job, no doubt, but struggling with infertility and stuff with Samantha. So hey to Samantha and Brexton back home,” said Busch.

On a lighter note, Busch joked, “I just remembered it is the Buschy McBusch race. A Busch won it. How about that.”

At the drop of the green flag, Brad Keselowski started from the pole position. Keselowski earned this position based on NASCAR’s mathematical formula, which now replaces qualifying. Keselowski remained in the lead until the competition caution waved on lap 25. On the first restart of the day, Keselowski maintained his lead after battling with William Byron.

Keselowski’s dominant lead came to an end with only six laps to go in stage one. Kyle Larson pulled a crossover move to steal the lead from Brad Keselowski. Just a few laps later, another lead change occurred. Kyle Busch took the lead from Larson and ultimately claimed the stage one win. This marked the first stage win of 2021 for Kyle Busch.

Kyle Larson gained the lead off pit road and maintained his position on the restart to begin stage two. As green-flag pit stops were underway, Cody Ware spun on pit road, but there was no caution for this incident. A few drivers stretched their fuel mileage in hopes of a caution. One of these drivers was the No. 47 of Ricky Stenhouse Jr. Stenhouse remained in the lead for a total of 23 laps until Larson reclaimed his lead on lap 145. Larson went on to gain his fourth stage win of the season.

After the stage break, Larson maintained his lead off pit road yet again and held his position off the restart. On the restart, Bubba Wallace got loose and made contact with both Alex Bowman and the wall. Despite this contact, there was no caution. However, Bowman did have to make a pit stop under green to address the damage on his car.

During green-flag pit stops, Tyler Reddick’s crew lost control of his tire, which led to a penalty for Reddick. Once the green-flag pit stops cycled all the way through, Larson was in the lead yet again, and NASCAR was able to throw a caution to allow the NASCAR safety crew to pick up the aforementioned tire. This caution appeared with only 38 laps to go.

On this round of pit stops, both Kevin Harvick and Daniel Suarez suffered from uncontrolled tire penalties. Back under green, Denny Hamlin stole the first-place spot from Kyle Larson, but Larson managed to steal it back within laps. Denny Hamlin blew a right front tire during his battle with Larson, which brought out a yellow flag. This caution came out with 23 laps to go.

Larson blasted to the lead on the restart. Austin Dillon got loose and up into the wall during the restart. Meanwhile, Ricky Stenhouse Jr. spun, which led to sixth caution of the day. Austin Cindric suffered damage from this incident also.

As they say, cautions breed cautions. As Kyle Busch stole the lead from Kyle Larson on the restart, chaos broke loose in the back. The incident included: Christopher Bell, Ricky Stenhouse Jr., and Ryan Preece.

A two-lap shootout brought the race to a close. During the chaotic restart, Kyle Larson made contact with Ryan Blaney, which shuffled them both to the back. Ultimately, Kyle Busch came out on top.

In the final lap of the race, Kevin Harvick trailed by a slim 0.336 seconds. Keselowski  finished third, behind Harvick. Matt DiBenedetto and Chase Elliott rounded out the remainder of the top-five. Notably, DiBenedetto’s top-five finish marks his second-straight top-five finish of the 2021 season.

Catch the NASCAR Cup Series back in action on Sunday, May 9 at 3:30 PM ET. Be sure to tune in to FS1 for all the coverage from Darlington, South Carolina.