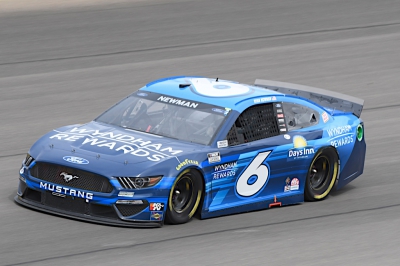 Anyone that knows Ryan Newman would know that the 20-year NASCAR Cup Series veteran is not all that interested in yesterday’s accomplishments. Instead, he chooses to focus on the current and reality, which for him centers around striving to win races, focusing on his two children and maintaining his busy farm life.

But at Kansas Speedway, he will achieve a milestone even he was not all that aware of when asked recently. Newman’s 700th career NCS start comes Sunday, a feat that’s only been accomplished by a handful of the sports’ greats. However, the 43-year-old and his unique sense of humor, initially thought differently of the feat.

“Seven-hundred starts means I’m old and that’s okay, but it’s a milestone no doubt,” Newman said. “It just shows that I’m experienced, lost more than I’ve won just like everybody else in this sport, and it’s pretty cool to still be doing something this long that I’m so passionate about.”

With recent retirements at the elite level of motorsports, only a few true veterans of the series remain, including Newman, who joins NASCAR champions Kevin Harvick and Kurt Busch as the only active Cup drivers to reach 700 starts.

“It means they’re old too, but from a sport standpoint, we’ve established ourselves, both from our individual resumes and from a sponsorships standpoint,” Newman added. “We’ve kept people happy and the fans have been engaged with us for many years now. It’s cool to be a senior member and have that resume built, but I still have a lot of business that I want to get done.”

On an ironic note, Newman will tie his longtime friend and mentor, Buddy Baker, for 18th on the all-time list. A piece of the milestone he also was not originally aware of, but one that makes the feat that much more meaningful to the veteran driver.

“I didn’t know Buddy Baker had 700 starts and that I’d tie him, but him being my mentor and driving coach (when I started) makes it even better,” Newman said. “That’s the most special part to me of reaching that number with having something in common with my hero in Buddy.”

Prior to his last-lap crash in the 2020 Daytona 500, Newman also had another notable streak to his credit with 649 consecutive starts, which puts him inside the top-10 of that category among all Cup drivers. Only Jeff Gordon (797), Ricky Rudd, Bobby Labonte, Terry Labonte and Jimmie Johnson had more consecutive starts at any point, while Harvick stands as the only active driver with a considerable streak.

When looking back over the course of any considerable length of time, especially in sports, people often ask ‘would you have done anything differently?’ For Newman, the answer is simple.

“My first race was a DNF, my second race I won the pole in Charlotte,” he said. “Looking back on it, I don’t know that I would’ve said I would be around for 700 starts; it’s crazy when you think about the number. I remember back in that day Dave Marcis was logging lap after lap and that’s something I look back at - I don’t compare myself to him - but I know that was part of the sport that was a topic of discussion, so when I get my 700th I know it’ll come up, but I don’t know that I would have said or done anything different, just fortunate enough to still be doing it.”

Eighteen wins, 265 top-10s, 116 top fives, 51 poles (most among active drivers), and a lot of memories are what Newman takes into Sunday’s race, but gratitude is what comes to mind most adding yet another statistical chapter to his book of rich accolades.

“Throughout the many starts before it was a lot of hard work and effort from team support, sponsor support and fan support,” Newman said. “A lot of racing luck I guess you could say and some moderate levels of success for people to keep me in race cars and let me continue to do what I love. I’m thankful, but it’ll just be another start in the end and it’s just a number - but a special number for sure.”

As part of the achievement, Roush Fenway will run a special decal on Newman’s Hy-Vee Ford Mustang at Kansas, highlighting the accomplishment with the number 700.