Newman Perseveres for 13th at Talladega 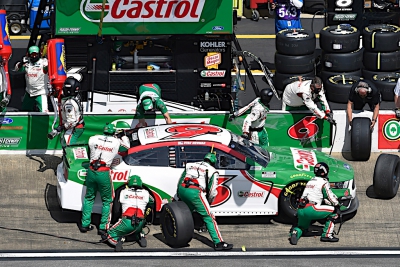 Stage racing played out to be the highlight of Sunday afternoon’s 500-mile race from Talladega Superspeedway, where Ryan Newman persevered and overcame a pair of late speeding penalties to bring his Castrol Ford Mustang home in the 13th position.

After the scheduled distance moved into NASCAR overtime, Newman was the recipient of the lucky dog, putting him back in the mix for the green-white-checkered finish. After restarting tail end of the field, the veteran fought back to the solid finish in the closing two laps.

Newman began the afternoon from the 28th spot but used his typical Superspeedway strategy staying near the rear of the pack most of the day. He drove to the line 24th in an action-packed end of stage one that saw a car on its roof.

Stage two had a similar outcome with a multi-car incident ending the segment with Newman in 21st. He rolled off 20th for the final 62 laps and maintained his strategy up until the final green-flag stop at lap 156, where Newman was caught speeding, then was penalized for speeding on the pass through.

Despite the mishap, Newman worked his way back on the lead lap in the closing moments and weaved through one final, dicey restart to bring home the top-15.

Newman and the No. 6 team head to Kansas Speedway next weekend. Race coverage is set for 3 p.m. ET on FS1 and MRN, and coverage can also be heard on SiriusXM Channel 90.