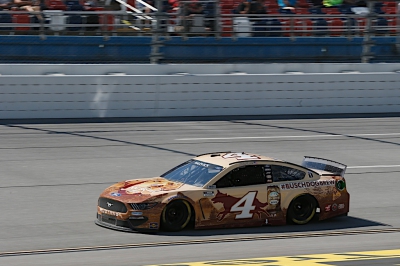 ● After starting 16th, the driver of the No. 4 Busch Dog Brew Ford Mustang made a run to the front of the field, taking the top spot on lap 15. He led four laps before relinquishing the lead.

● The competition caution was displayed on lap 25. Harvick said he needed a little tape off the nose of the car to help his ability to push the car in front of him. He noted that his racecar was handling a little on the loose side. While the issue wasn’t major, he asked for a slight adjustment, as he believed it to be a condition that would not improve as the race continued. The team made a chassis adjustment, changed four tires and added fuel. Harvick lined up 10th for the restart.

● Harvick was in eighth place on lap 38 when he reported that the No. 4 Busch Dog Brew Ford Mustang was running hotter during this run.

● The caution waved on lap 38 for a single-car accident.

● Harvick reported that even though he wasn’t pushing, the temperature on the engine was running significantly high. The team elected to pit to remove more tape and change left-side tires while adding fuel. A number of cars stayed out, which placed Harvick in 23rd for the restart.

● Harvick quickly set to work and was in fifth place by lap 48. Leading the charge for the inside lane, Harvick looked poise to return to the lead before the pack broke separated to a three-wide draft.

● A multicar accident unfolded at the front of the field on lap 59, with Harvick narrowly missing Joey Logano’s No. 22 Ford as it flipped through the air. The incident resulted in the first stage ending under caution. Harvick was scored in eighth place.

● The team made a stop during the break to change four tires, clean the grill and add fuel. Harvick lined up 10th to start Stage 2.

● The 2014 NASCAR Cup Series champion quietly went to work to start the second stage, racing among the top-10 during the opening laps.

● Green-flag pit stops started taking place on lap 90. The No. 4 Busch Dog Brew Ford made its stop on lap 91 for right-side tires and fuel. Harvick was caught speeding getting onto pit road. The resulting penalty was another trip down pit road. He was scored in 29th after serving the penalty, several positions off the lead draft.

● When caution waved on lap 103, the team elected to pit for four tires and fuel. During the stop, the team was caught with a crew member going over the wall too early. As a result, Harvick had to start at the tail end of the longest line in 28th.

● With less than 10 laps remaining in the stage, Harvick exercised a little self-preservation and elected to not push to the front. That decision proved fruitful, as a multicar accident unfolded at the front of the field with just two laps left in the stage. Harvick was scored in 20th to finish the stage.

● A lot of debris covered the track so the team elected to pit during the caution for four tires and fuel. Harvick lined up 11th to start the final stage.

● The No. 4 Busch Dog Brew Ford Mustang driver quietly logged laps to start the final stage. As the race started to wind down to 40 laps to go, Harvick began making a move back to the front of the field. He was scored in fourth place by lap 150.

● Riding in the high line and getting a push from Stewart-Haas Racing teammate Aric Almirola, Harvick assumed the lead on lap 151. He proceeded to swap the lead with fellow drivers for the next handful of laps around the 2.66-mile oval.

● Harvick surrendered the lead on lap 160 to make his own green-flag pit stop for four tires and fuel and resumed racing in sixth place.

● A single-car accident on lap 171 resulted in a caution. Harvick was scored in 13th place. The team elected to pit to change tires and add fuel. He lined up 13th for the restart.

● Harvick was in sixth and in the outside lane by lap 179. A big push allowed that lane to move to the front, positioning the No. 4 Busch Dog Brew Ford Mustang in fourth place with eight laps to go.

● Caution was displayed with three laps to go for debris, setting up a green-white-checkered finish.

● Harvick lined up fourth for the restart. He did his best to position himself for the win but ultimately finished the day in fourth place.

● Harvick earned his third top-five of the season and his eighth top-five in 41 career NASCAR Cup Series starts at Talladega.

● Harvick led three times for 12 laps, increasing his laps-led total at Talladega to 276.

“We definitely didn’t like to see the ‘22’ flying around in the air right in front of us, but our Busch Dog Brew Ford Mustang was good all day. We raced all day. I kind of slid the left-front (tire) there and got a speeding penalty at one point. We were able to stay on the lead lap, but everybody did a great job. The car is still rolling at the end of two speedway races in a row. I think that’s a first for us. We just need a little bit of momentum. The cars have run well on the speedways. Hopefully, next week we have everything together at Kansas and we can have a good day.”