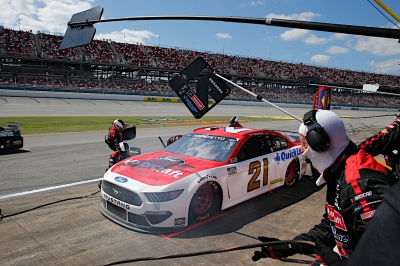 Matt DiBenedetto and the No. 21 Motorcraft/Quick Lane Mustang came up short in their bid for victory in Sunday’s GEICO 500 at Talladega Superspeedway, but still ended up with their first top-five finish of 2021, their first Stage win of the season and led five times for a total of 28 laps.

DiBenedetto and the Motorcraft/Quick Lane Mustang were among the leaders from start to finish of Sunday’s race. After starting 13th, he took the lead for the first time on Lap 51 and collected 10 Stage points plus a Playoff Point for winning the opening 60-lap Stage.

He continued to run up front in Stage Two, but had a big moment after contact with Kyle Busch in the closing laps of the Stage.  When DiBenedetto recovered, he elected to stay back until the end of the Stage, a move that paid off as he escaped damage from a multi-car crash in the lead pack at the end of that Stage.

In the final segment of the race, DiBenedetto and the Motorcraft/Quick Lane Mustang climbed from as far back as 23rd place to fifth with 20 laps remaining. DiBenedetto took second place with 16 laps remaining and was running there when the caution flag flew for a spin by Quinn Houff.

Just after a restart with 12 laps to go, DiBenedetto continued in the lead and held it until the yellow flag flew with four laps remaining for debris from Martin Truex Jr.’s car.

That caution pushed the race into overtime, and DiBenedetto surged ahead when the green flag was displayed. He held the top spot as the lead pack sped under the white flag, his 14th-straight lap led, but lost it when he moved to the outside lane ahead of an oncoming Ryan Blaney. But after DiBenedetto made the lane change, Blaney lost his drafting push. That allowed DiBenedetto’s Ford teammate Brad Keselowski to take the lead and the win, while DiBenedetto held on to finish fifth, as Mustang drivers swept four of the top five finishing positions.

Despite his disappointment over the events of the last lap DiBenedetto focused on the positives afterward.

“We will hold our heads high,” DiBenedetto said. “We won a Stage, ran up front all day and came away with a top-five-finish and had a good points day. We did the best we could.”

DiBenedetto did say he didn’t want to see the final caution flag fly.

“I liked how we were sitting before that last caution fell,” he said, adding that the move to pick up Blaney on the final lap seemed to be a good one at the time. “Everything got all jumbled up after that.”

“But our time will come.”

Next up for DiBenedetto and the No. 21 Wood Brothers team is a 400-miler at Kansas Speedway on Sunday. The 42 points that DiBenedetto earned at Talladega propelled him to 17th in the points standings, 12 points behind 16th place.