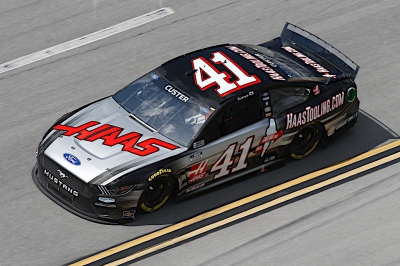 ● The HaasTooling.com Ford immediately moved toward the front in the opening laps. Custer was in the top-15 by the end of lap two and in the top-10 at the end of lap three. He reported on lap 12 that his racecar was just a little free, and by the lap-25 competition caution, when he was running 24th, he said his biggest issue was the car was “shifty in dirty air.” He pitted for tires, fuel and adjustments to tighten up his handling. He restarted 19th when the race went back to green on lap 30.

● Custer was up to 11th when the caution flag flew for a single-car incident on lap 39. He said his Mustang was now a little tight, that the team should go back halfway on the changes made during the competition caution. He stayed on track along with the entire top-24 and restarted 11th on lap 43.

● The caution flag flew for a multicar incident on the final lap of the stage with Custer having dropped back to 19th after running in the top-five with a slew of fellow Ford drivers for a majority of the run. He pitted during the break for four tires, fuel and a left-rear track-bar adjustment.

● The HaasTooling.com Ford Mustang worked its way back into the top-five midway through its run to the scheduled lap-91 green-flag stops by all the Ford teams. Custer said his racecar was “just a little free in but not bad … actually this is the happiest I’ve been with the car.” He pitted for fuel and right-side tires only and resumed.

● The caution flag flew for fluid on the backstretch on lap 104 with Custer running seventh. He said his Mustang was pretty tight shortly after the previous pit stop, but it didn’t affect his ability to run at the front. He stayed on track during the caution and restarted seventh on lap 109.

● Custer had dropped back to 17th and was holding position entering the final lap of the stage when a five-car accident brought out the caution flag. Custer made it through the mayhem but emerged with a flat left-rear tire after running over debris, sending him to pit lane before it was open, and he was credited with a 26th-place stage finish.

● The No. 41 HaasTooling.com Ford Mustang driver bided his time running in the top-20, single file with the rest of the field, until it was time to prepare for green-flag pit stops. Custer was running seventh among the rest of the Fords at the front of the field when they were called to pit lane on lap 159. He took four tires, fuel and adjustments to help remedy a loose condition. He resumed 12th with 28 laps to go to the scheduled finish.

● The caution flag flew on lap 171 for a single-car incident with Custer running 15th. He said he was pleased with the balance of his Mustang but that he could use a fresh set of tires. He pitted for four tires and a splash of fuel and restarted 16th on lap 176.

● Custer was running 10th when the caution flag flew for debris on lap 185, three laps from the scheduled finish. He stayed on track and restarted 10th for the green-white-checkered finish on lap 189.

● He held his position for those final two laps.

● This was Custer’s best finish so far this season. His previous best result was an 11th-place drive in the season-opening Daytona 500.

● This was Ford’s 31st all-time NASCAR Cup Series victory at Talladega and its 10th in the last 12 races at the 2.66-mile oval. Ford won its first race at Talladega on May 4, 1975, with NASCAR Hall of Famer Buddy Baker.

“That was the solid race we needed. I think if a thing or two would’ve gone our way on that last restart, we would’ve ended up with an even better finish. But our HaasTooling.com Ford guys did a good job getting us a fast Mustang for this race. We started out a little too free, then we were on the tighter side, and then we got the car about as comfortable as I’ve ever driven on a superspeedway. We’ll take this one and hopefully build some momentum for this next stretch of races. Now, we just have to keep clicking off those top-10s.”