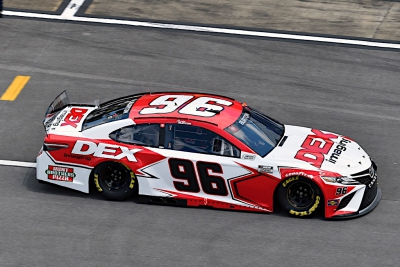 ● “Pretty neutral here,” Burton reported about his racecar after 18 laps.

● During a fuel-only pit stop during the competition caution on lap 27, Burton departed the pit box with his fuel can still attached. The infraction forced Burton to restart at the tail-end of the longest line.

● During a caution period from laps 40-43, Burton stayed out to maintain track position. “Still neutral on balance,” Burton said about his DEX Imaging Toyota.

● As draft ebbed and flowed, Burton rose to 13th on lap 45 but then settled into 25th as the stage drew to a close.

● The team pitted for four tires and fuel at the conclusion of the stage,

● He rose to 14th before pitting with his fellow Toyota drivers under green for fuel only on lap 93.

● He deftly avoided a wreck in the tri-oval on lap 120 to finish the stage an impressive 10th.

● Burton pitted for four tires and fuel at the end of the stage.

● Burton made a scheduled, green-flag pit stop for fuel and right-side tires on lap 155.

● After pit stops cycled through, Burton was 26th.

● Burton took advantage of a caution and pitted on lap 173 for four tires and fuel, then lined up 22nd for the lap-176 restart.

● He worked his way into the top-10 when the final caution flag flew on lap 186. Staying on track, he restarted seventh for the green-white-checkered finish on lap 189.

● The high line Burton chose for the final two laps got bogged down, and he fell to his finishing position of 20th.

“It was a lot of learning. It was pretty fun, just a different level of competition when you’re against these guys. It makes you better when you go back to Xfinity, hopefully, and it makes me a better driver. Just happy I had the chance to come out here and do it. I very rarely get emotional or that excited before races because I’m so focused, but this weekend was pretty neat. I’m thankful for the opportunity to do it. It was pretty awesome, and can’t wait to do it again someday. Talladega is so tough in general, just a lot going on at once. Learning a new team, spotter and crew chief with all of that going on, too, is a big challenge, but it was the same (as racing in the Xfinity Series) but different, if that makes any sense at all. It was definitely different. The level of intensity was different, but the main fundamentals are basically the same.”