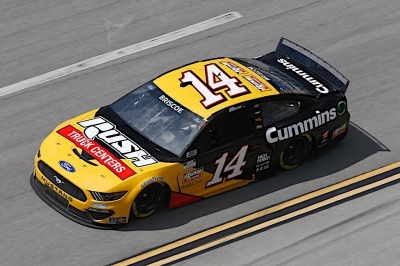 ● By lap three, Briscoe had placed his Rush Truck Centers/Cummins Ford Mustang in the top-10, and he quickly joined his Stewart-Haas Racing teammates in the top-five. When the action picked up, he dropped back to the second pack and ran just outside of the top-20 until the competition caution on lap 25.

● The Rush Truck Centers/Cummins driver was running in the middle lane, attempting to collect stage points at the end of the first stage, when the leaders made contact, sending the No. 22 onto its side. Briscoe turned left to avoid contact with the No. 22 and tagged the 2 as the stage was ending.

● Briscoe pitted twice under caution to repair damage to the left-front fender and maintained his position on the lead lap.

● Briscoe was running 18th when scheduled green-flag pit stops began. He eventually gave up the 13th position when the Fords hit pit road on lap 92 for fuel only.

● The fourth caution of the race occurred on lap 104 with Briscoe running 10th. When the field returned to green, Briscoe was shuffled out of line to the top lane with no help and fell back to 25th.

● The Rush Truck Centers/Cummins Ford Mustang was running 21st when the drivers at the front of the pack began wrecking with one lap remaining in the second stage. Briscoe avoided the incident and picked up a 18th-place result as the stage ended.

● During the stage break, Briscoe visited pit road for tires and fuel and pitted a second time on lap 126 to top off on fuel.

● The No. 14 moved into ninth place on the lap-126 restart signaling the beginning of the final stage. Briscoe maintained his position in the top-10 until lap 145, when he fell back to 18th and reported his Ford Mustang was loose.

● Scheduled green-flag stops began on lap 155, and Briscoe moved into the sixth position. On lap 160, the group of Fords made their way to pit road with Briscoe taking right-side tires and fuel. He returned to the track in 10th.

● When the caution flag waved on lap 173, Briscoe pitted from 14th for four tires and fuel. He restarted 22nd with 12 laps remaining. He ran as high as seventh before falling back to 16th when the yellow flag was shown on lap 186 for debris.

● Briscoe restarted 16th for the green-white-checkered finish and crossed the line in 11th.

● This was Briscoe’s best finish so far this season. His previous best result was an 18th-place drive Feb. 28 at Homestead-Miami Speedway.

● Briscoe led one lap – his first lap led in the Cup Series.

● This was Ford’s 31st all-time NASCAR Cup Series victory at Talladega and its 10th in the last 12 races at the 2.66-mile oval. Ford won its first race at Talladega on May 4, 1975 with NASCAR Hall of Famer Buddy Baker.

“Hate that we couldn’t get a top-10 out of it, but honestly, 11th is a great finish. You never know how it’s going to go at Talladega, and I was hoping this could be a race for us to turn things around and get a good finish. Momentum is always a good thing. This is the confidence builder we need heading into the next few races.”