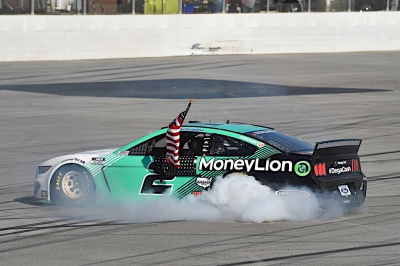 The day was over before it began for Kyle Larson with just a lap on track the engine temps spiked bringing him to pit road leaving the pit crew to spend three laps getting the engine cooled down and back out on track.

However, within a few laps Larson returns to pit road with smoke boiling out the exhaust. The crew immediately pushed the car back to the garage and the day was done for the No. 5 Hendrick Motorsports team.

While under green both Ford and Toyota contingents started ganging up including Denny Hamlin and Bubba Wallace who both started at the rear of the field due to pre-race issues on their cars. Wallace for his effort was about to motor out front of Harvick and their Ford contingent to lead several laps swapping it back and forth.

With the caution out for the competition caution Harrison Burton making his first start in the Cup Series for Gaunt Brothers left early dropping a fuel can at the end of pit road sending him to the back of the field on the green flag.

The first caution of the day would come out shortly after returning to green this time for the No. 28 machine driven by Joey Gase who looped the car off turn four in a paint scheme honoring Davey Allison who lost his life in a helicopter accident right here at Talladega Superspeedway. Allison following his death donated his organs to others and Gase who regularly runs schemes to find donors.

With stage one coming to a close bumping and banging began to increase and with two corners to the flag to finish out the stage chaos erupted on the back when Stenhouse Jr. got into Hamlin turning him up into Joey Logano’s car. Logano would then be sent in the air flipping with Bubba Wallace just narrowly missing the car as it came back down to the ground.

Passing 100 laps for the day smoke began to pour from the No. 1 machine of Kurt Busch bringing out the fourth caution of the day. While sitting on pit road fire billowed from under the hood causing the team to take it behind the wall and make repairs for an oil leak.

As the end of stage two comes to a close blocking once again intensified up front with chaos once again breaking loose with Hamlin a lap down yet running with top-10 cars made contact with Truex then collecting Bowman, Elliott and more in the caution which would end the stage allowing Bubba Wallace to collect valuable stage points.

Following a quick caution for Houff in the wall the field fired back off with Jones and DiBenedetto up front with 12 to go. This would not last long as Truex had an issue with a tire down bringing him to pit road. Yet, once back out track the tire issue would return blowing a second tire this time bringing out the caution yet again with just three to go sending the race into NASCAR over time.

DiBenedetto and Blaney with the Penske alliance setup to make a run on the checkered flag as it got back under green. When it was all over with Brad Keselowski would win the GEICO 500 at Talladega Superspeedway.

The NASCAR Cup Series moves to the heartland next weekend to Kansas Speedway.