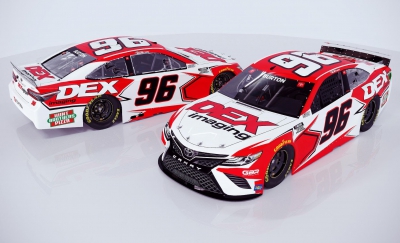 You’re going to be making history this weekend as the first driver born in the 2000s to start a NASCAR Cup Series race. What does that mean to you?

“I’m just thankful for the opportunity. It’s a dream come true, and it’s pretty neat to think back on all the days that I spent working and taking my parents’ time away and travelling all over the country with them trying to race. And everyone in NASCAR along the way, whether it’s KBM (Kyle Busch Motorsports) or Joe Gibbs Racing who have helped me be a better racecar driver and get to where I am now, it’s nuts. It’s something I’ll never forget. I’m excited to be here, but I’m a competitive guy, so just being there isn’t enough. I’m really looking forward to working hard and trying to get a really good run out of it.”

Your sponsor DEX Imaging has been with you since you were 13 years old and is joining you for your first Cup Series start. That has to be something special.

“It’s crazy. DEX Imaging, when we first started our partnership, it was a company I hadn’t really seen or heard of. When I met the people there, they became like family very quickly. Being that young and having someone believe in you is crazy. And they obviously are happy to be participating in NASCAR. They’re on (Ryan) Blaney’s car in Cup, they’re on my Xfinity car, and now on my Cup car. It seems like every sporting event I’m watching, they’re on the board. I’m watching the (NBA’s Charlotte) Hornets game the other day and I see DEX Imaging scrolling across the screen, and I thought, ‘Gosh, that’s so cool.’ To think about them taking a flier on me when I was 13 and growing from Late Models to K&N to Trucks to Xfinity and now to Cup is pretty wild. It’s something that not a lot of people have had happen to them.”

What was your dad’s reaction when you introduced the idea of wanting to be a racecar driver when you were younger?

“Dad kind of felt the need to put me through the wringer to find out. Hey, it’s a fun hobby if you’re a young kid to go Quarter Midget racing, but there’s a difference between wanting to do it for a living as a kid and having to feed your family driving a racecar and the amount of commitment that it takes when you’re older. He ran me through the wringer, working every day after school. Whenever we were testing, it was long hours and he didn’t let me get out of the car, made me stay in there. I think those are the moments that made me who I am today and I’m really thankful for it. Those were the moments when you really had to dig deep and realize you really did want to do this because quitting was never an option.”

How do you feel about Talladega being the track where you’re making your Cup Series debut?

“Talladega’s a tough track, there’s a lot of crazy stuff going on and there’s a high attrition rate. You want to find a way to learn and be aggressive, but also not crash, so there’s a lot going on there. In this sport, you’ve got to be versatile. Jon Gruden (head coach of the NFL’s Las Vegas Raiders) has a football saying that goes something like, ‘The best ability is availability.’ So, I’m ready to go do it and ready to take it on. Superspeedway racing is a part of our sport that is very important. Our biggest race of the year is held at a superspeedway. So I’ll be trying to figure that out, trying to learn, and be the best I can be for hopefully more opportunities down the line, and I think it’ll make me a better Xfinity driver, as well. I think, gosh, I’ve made the right decision and I think it’s the right thing to do.”

Superspeedway racing is all about working how you work with teammates and other drivers. You’re literally going to be the new kid on the block this weekend. How do you plan to work with other drivers?

“Every time I’ve made a jump into the next series, you always look at the veterans you’re racing around and you think, ‘Oh, man, I know that guy and it’s pretty cool,’ so I think there will be some of that. But I’ve been lucky enough to be around a lot of those guys ever since I was a little kid and they know me. Somebody who’s been helping me, recently, has been Denny Hamlin. I’ve been wearing him out on the phone trying to get better. I asked him for some pointers when this Cup deal was announced and he was happy to help and I appreciate that. I think a lot of the veterans are more than happy to help. It’s just a matter of reaching out and asking for it.”

Do you feel like your performance this weekend can and will lead to other Cup Series opportunities?

“That’s what I want, I want to be a Cup driver one day. This race is about trying to learn a lot, obviously really quickly, with no practice and no qualifying and just getting in there and going. It’s trying to learn a lot and trying to do the best I can, and if that opens more doors, it’ll open more doors, and if it doesn’t, it doesn’t. For me, it’s a great experience to be even talked about to run more Cup races, or even a Cup race. I’m just focused on the moment right now. The best thing I can do as a driver is focus on the next weekend and trying to be the best I can be then, and hopefully the chips will fall where they will.”

What kinds of things have you been doing to prepare for this weekend?

“For me, preparing has helped me a lot recently to be better. I think the way I’ve prepared has changed a little bit. I’ve got some great people with me who are helping me with that. For me, preparation has been key, watching a lot of race film. The simulator is great for tracks where you’re not running single file like you do at Talladega. You can’t really simulate the draft and what’s going to happen in there. So it’s kind of tough to prepare for this one because there’s no real, accurate way to do sim for it. There’s no real, accurate way to feel anything other than just watching and kind of imagining what it will feel like and trying to prepare yourself the best you can that way. But I’ve been doing everything I can and making the notes I can and, when the time comes, I’ll attack it.”