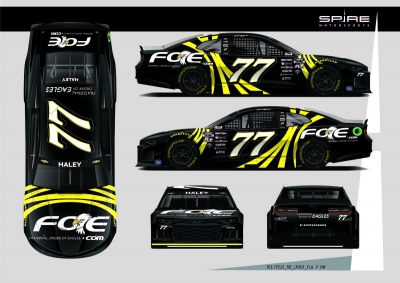 "The Eagles, Justin Haley and Spire Motorsports have a history of success in superspeedway races and we're excited for the opportunity to head to Talladega with the F.O.E. on the No. 77 car," said Dave Smith, F.O.E. Grand Worthy President. "We're proud to call Justin a fellow Eagle and our 650,000 members look forward to cheering him on this weekend."

Haley, a native of Winamac, Ind., drove Spire Motorsports’ No. 77 Chevrolet to its first NASCAR Cup Series win while carrying the F.O.E. livery in the 2019 Coke Zero Sugar 400 at Daytona International Speedway.

He is a two-time NASCAR Xfinity Series winner at Talladega after sweeping both events at the famed 2.66-mile superspeedway in 2020. Meanwhile, Haley took the checked flag last August at Daytona, affording him three of four superspeedway victories last year on NASCAR’s junior circuit. He currently sits fourth in Xfinity Series points seven races into the 2021 campaign.

“I’ve had such a great partnership with the Fraternal Orders of Eagles and we’ve enjoyed a lot of success together,” explained Haley. “We’ve won a lot of races. I’ve done pretty well on superspeedways throughout my career and the Eagles were on board when we won the Cup race at Daytona in 2019. I’ve had this race circled on my calendar since the start of the season. Hopefully we can stay out of trouble and race our way to the front when it’s time to make it happen. Spire Motorsports has a proven track record on superspeedways so everyone is looking forward to getting down to Talladega to try and back up our previous success.”

The GEICO 500 from Talladega Superspeedway will be televised live on FOX Sunday, April 25 beginning at 2 p.m. Eastern Daylight Time. The 10th of 36 races on the 2021 NCS schedule will be broadcast live on the Motor Racing Network and SiriusXM NASCAR Radio Channel 90.