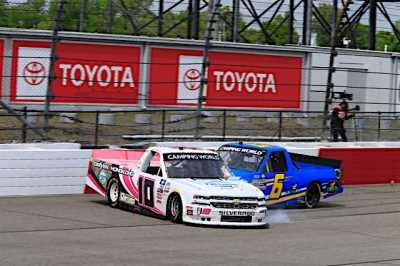 It was revealed Monday that driver Jennifer Jo Cobb has not been approved by NASCAR ahead of her announced Cup Series debut at Talladega this Sunday. The exact reasons are still unknown, but sources indicate it was determined prior to her run-in with competitor Norm Benning at Richmond this past weekend. Another factor according to sources is that she has only 11 lead-lap Truck Series finishes in 217 truck starts.

“We’ve been informed by the sanctioning body that Jennifer is not approved to compete in the NASCAR Cup Series event at Talladega SuperSpeedway...This is an unfortunate situation, but as a team, we support NASCAR’s decision to uphold the sanctioning body's rules & regulations.”

A new driver for the No. 15 ride has yet to be announced.

Cobb’s only top 10 Truck Series finish came in the season opener at Daytona in 2011, where she finished sixth. The Kansas City, Kansas native has 31 career XFINITY Series starts along with nine ARCA Menards Series starts.