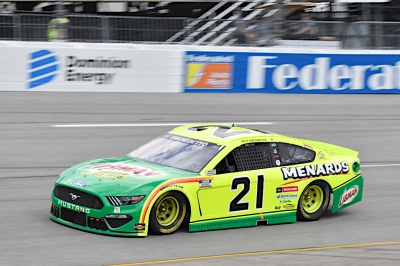 A smooth, steady performance by Matt DiBenedetto and the Menards/Libman team in Sunday’s 400-lap Cup Series race at Richmond Raceway paved the way for a season-best ninth-place finish.

DiBenedetto and the No. 21 Menards/Libman Mustang lined up 16th for the start of the 300-mile race on the three-quarter-mile Richmond track. He moved up initially to as high as 14th but had dropped to 18th at the end of Stage One, an 80-lap segment.

In the second Stage, a 155-lap run, the Menards/Libman crew ran several laps long on the first pit stop and were in third place when Ryan Newman spun to bring out the caution flag.

DiBenedetto was able to bring the No. 21 Mustang to pit under caution, and restart in ninth place. He pitted earlier in the run on his second stop and was able to end that Stage in sixth place, earning five Stage points.

In the final 163 laps of the race, the Menards/Libman team was among the first to pit in each of the two cycles, and maintained a spot in the top 10 throughout.

When the race’s final caution flag flew with 20 laps remaining, DiBenedetto had just dropped out of the free pass position but was able to take the wave-around and hold ninth place until the checkered flag.

It was his sixth-straight finish of 16th or better, and he and the Wood Brothers team jumped four spots in the points standings to 18th.

“It was just a nice smooth day,” DiBenedetto said. “That was the most rewarding part of it, and getting some Stage points was big.”

He said the No. 21 Menards/Libman Mustang was driving well early on, even though he was unable to gain many positions at that point.

“I wasn’t complaining much at all at the first of the race,” he said. “We just needed track position. Once we caught a break with the caution flag and got some track position and got in the top 10, we had the car to run up there with no mistakes for the rest of the day.”

He said the Menards/Libman crew was spot-on all afternoon.

“They did a good job on the pit stops, getting all the lugs on and taking care of the important stuff,” he said.

DiBenedetto also was pleased to make another jump in the championship standings.

“It just shows the strength of our team, and it’s rewarding to finally get that top 10 and be climbing up there in the points, digging out of that hole and doing what I’ve known all along that we’re more than capable of as a team,” he said.

After a stretch of short-track racing, DiBenedetto and the Wood Brothers team now head to Talladega Superspeedway for next Sunday’s GEICO 500.