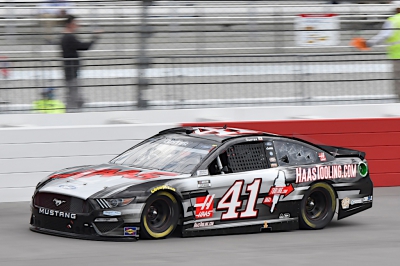 ● The HaasTooling.com Ford improved one position to 20th by the time the competition caution flag flew on lap 30. Custer said it was “really tight in the center” at the start of the run but things improved through the course of the run, then was “a little too loose” later in the run. He pitted for four tires, fuel and a track-bar adjustement and restarted 20th when the race went back to green on lap 38.

● It was all green-flag racing to the end of the stage, during which Custer dropped five positions, saying his biggest issue was still an extremely tight condition in corner center. He pitted during the break for four tires, a left-rear track-bar adjustment and a spring rubber added to the right rear.

● The HaasTooling.com Ford Mustang was up to 24th place when Custer was called to the pits under green on lap 138. He reported the changes during the first stage break “fixed about half the problem” during the restart. On lap 105 he reported he was too tight to be able to run the bottom of the racetrack. He received four tires and a left-rear track-bar adjustment.

● Two laps after rejoining the race in 28th, the caution flag flew for a single-car incident in turn three. Custer stayed on track and restarted 27th on lap 147.

● Custer was up to 19th when it came time for his second pit stop of the stage, which came under green on lap 188. He continued to fight a tight condition in corner center. He took four tires and fuel and settled back in 27th place as the field continued to cycle through the round of green-flag stops.

● The tight condition was improved, Custer said, during the initial laps after the green-flag stop, but then the tight condition returned after 10 laps and the HaasTooling.com Ford started losing forward drive over the long run to the end of the stage. Custer pitted during the break for four tires, fuel and another spring rubber added to the right rear.

● The No. 41 HaasTooling.com Ford Mustang was rolling in 25th place through the green-flag run to the stage’s first scheduled stop on lap 291. Custer pitted for four tires and fuel and resumed 26th  once the field cycled through this round of stops.

● The second incident-related caution flag flew on lap 381 with Custer still running 24th. He stayed on track and restarted 23rd on lap 388, then held his position in the final 12 laps to the checkered flag.

“We had a couple of issues we were trying to shake all day, the biggest one being that after the first 10 laps of a run, we just had a hard time getting our HaasTooling.com Ford to turn over the long run. There were so few cautions that we didn’t have the chance to make significant enough changes to try and fix it. A tough last three races on these short tracks. We’ll get to stretch our legs a bit next week at Talladega.”