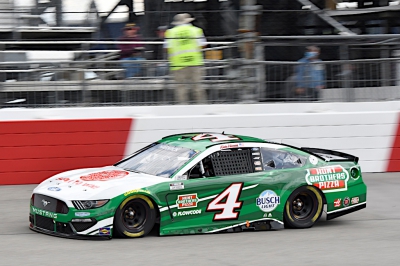 ● Harvick had the No. 4 Hunt Brothers Pizza Ford Mustang in sixth place when the competition caution came out on lap 30. He reported that his car was handling on the tight side, so the team made an air pressure adjustment, changed four tires and added fuel on the ensuing pit stop.

● Harvick was in ninth place on lap 67 when he noted that the adjustments may have helped the drive off of the turns, but did not alleviate the car’s tightness.

● Handling issues continued to hamper the Hunt Brothers Pizza Ford Mustang as the stage came to a close. Harvick reported that the drive off the corners had gotten worse and that he really needed help with the tightness he was experiencing in the center of the turns.

● The team made more aggressive adjustments during the break, with a series of chassis and air pressure adjustments. They changed four tires and added fuel. Quick pit work placed Harvick in eighth for the start of the second stage.

● Harvick quietly set to work at the start of the stage and was in the top-five by lap 105.

● Running in fifth place on lap 125, Harvick reported that he still needed a little help with drive off the corners, but that overall the car was handling better.

● The yellow caution flag was displayed on lap 142 for a single-car accident. Harvick was scored in eighth and one of just 11 drivers on the lead lap. With only three laps on his tires, the team elected to keep Harvick out on the racetrack during the caution, which placed him second for the lap-148 restart.

● As the stage unfolded, the handling on the Hunt Brothers Pizza Ford Mustang began to fall off. Harvick was in fifth place on lap 181 and reported that he needed rear grip.

● Another round of green-flag pit stops started on lap 183. Harvick made his own trip to pit road on lap 184 for an air pressure adjustment, four tires and fuel. He was scored in sixth by the time green-flag stops were complete.

● Harvick was in fifth place when the stage concluded. He reported that his car was still too tight in the center of the turns. Additionally, he was having a hard time getting on the throttle off turn four and he remained loose getting into turn one.

● It was another chassis and air pressure adjustment, four tires and fuel for Harvick during the break. Quick pit work placed the Hunt Brothers Pizza Ford Mustang in fourth for the start of the final stage.

● Harvick was in fifth place on lap 285 when he noted that the tight-handling issue continued to be a problem.

● Green-flag pit stops started taking place on lap 290 with the No. 4 team making its stop on lap 291. It was four tires and fuel for Harvick, who was scored in fourth place once pit stops cycled through.

● Harvick was in fourth place on lap 315 when he reported that the car was still “plowing tight” and that he had also lost rear grip.

● The handling issues resulted in Harvick dropping a couple of spots in the running order. He was in sixth place on lap 340 when another round of pit stops started taking place. Harvick made his stop on lap 341 for an air pressure adjustment, four tires and fuel. Once stops cycled through, Harvick was back in sixth place.

● Harvick had lost a few positions and was in eighth place on lap 379 when he cut a right-rear tire. This sent him spinning into the turn one wall, damaging the right-rear of the car.

● Work to repair the damage to the Hunt Brothers Pizza Ford resulted in Harvick losing laps to the leader. By the time the repairs were complete and Harvick was able to return to the track, he was scored three laps down in 24th.

● Harvick quietly completed the final 10 laps of the race to extend his streak of running at the finish to 57 races, a run that began on Sept. 1, 2019 at Darlington (S.C.) Raceway.

The next event on the NASCAR Cup Series schedule is the GEICO 500 on Sunday, April 25 at Talladega (Ala.) Superspeedway. The race begins at 2 p.m. EDT with live coverage provided by FOX and SiriusXM NASCAR Radio.