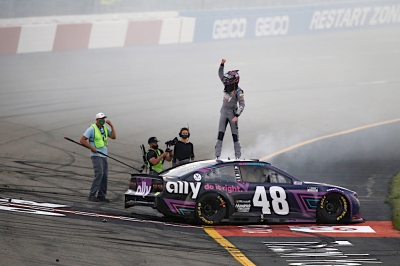 It was a rather mundane race until the final goings of the Toyota Owners 400 that saw the hometown Hamlin take command of the race throughout. But in the finally 10 laps Alex Bowman took over the lead and never looked back.

When it was all over with Bowman had pulled away by over three-tens a second at the checkered flag making him the eight different winner in the 2021 campaign.

"We restarted third and I’m like, if we get out of here with a solid top-five we’ll be good. We overcame a lot today. To be honest with you, we were terrible on short runs." Said Bowman

Hamlin would end the day with a race high 207 laps lead throughout the day finishing second and obviously disappointed with the way the car had ran in the final laps and the restart that allowed Bowman to make the pass for the win.

Joey Logano who was strong throughout the day keeping pace with the front runners ended the day in fourth. Followed up by a pair of Joe Gibbs Racing Toyota’s of Christopher Bell and Martin Truex Jr. who also lead just over 100 circuits around Richmond throughout the day.

Almirola finally coming up with a sixth place finish and a good day for that Stewart Haas Racing team that’s been struggling throughout the season. Case in point Harvick who rode inside the top-10 for much of the day ended up 24th and three laps down after a late race incident that saw his No. 4 machine spin with a tire down in turn one.

The series moves from one of the shortest tracks in NASCAR to the biggest, baddest and longest 2.66 mile monster Talladega Superspeedway next weekend for the GEICO 500.

Note of interest: This is the last short track race until the series moves back to Richmond for the championship playoff event in September.