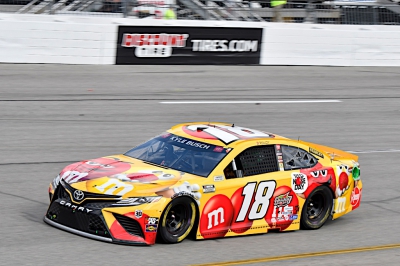 ● The M&M’S Red Nose Day driver started 10th but quickly fell to 14th as he told crew chief Ben Beshore he needed the most help with his drive off the corner.

● Busch moved up to 13th when the competition yellow waved on lap 30. Beshore called Busch to pit road for four tires, fuel and a chassis adjustments, and Busch restarted in 12th.

● The two-time Cup Series champion told Beshore as the laps wound down in the stage that the car started off better, but he still had the same issue with the drive off.

● The M&M’S Red Nose Day driver came to pit road on lap 84, as Beshore hoped to tighten the No. 18 to start Stage 2. Quick work by his over-the-wall team saw Busch jump up from 11th to seventh coming off pit road to start Stage 2.

● Drive off the corner continued to be a problem as Stage 2 unfolded for Busch. He dropped back a few positions and was in 11th by lap 120 as he attempted to negotiate the handling issues.

● Green-flag pit stops started taking place around lap 130 with the No. 18 M&M’S Red Nose Day team making its stop on lap 133 for a chassis adjustment, four tires and fuel.

● Caution was displayed on lap 139 for a single-car accident. Because a handful of cars still had yet to pit, Busch was scored one lap down in 14th place. With only three laps on the tires the team elected to stay out and take the wave-around to get back on the lead lap. Busch lined up 14th for the restart on lap 146.

● The two-time Cup Series champion had picked up a few positions and was in 11th when he reported that the drive off was still terrible but that the tight issue had improved slightly.

● Another round of green-flag pit stops started on lap 183, with Busch making his own trip to pit road on lap 184 for chassis and air pressure adjustments, four tires and fuel. Busch was in 10th place by the time green-flag stops were complete.

● During the next several laps Busch quietly picked up positions and was scored in seventh place by lap 227.

● Busch was scored in seventh place when Stage 2 concluded. He noted that the car was handling a little better toward the end of the stage but that he still needed help with drive off.

● The No. 18 came to pit road on lap 240, taking on four tires and an air pressure adjustment. The M&M’S Red Nose Day over-the-wall team gained Busch two spots on pit road to help him restart fifth for the start of the final stage.

● The M&M’S Red Nose Day driver slowly worked his way up through the field, finding himself up to the third position prior to the last scheduled pit stop of the day on lap 393.

● However, as Busch came to enter pit road on lap 393, he came in too hot, getting his right-side tires on the commitment line, which is a penalty. The penalty necessitated a return trip down pit road for a drive-through penalty two laps later. Busch fell to 10th as the first car one lap down, hoping for a caution to get the free pass.

● The caution did indeed come, as the yellow flag waved for a Kevin Harvick accident with 20 laps to go.

● After getting his lap back, Busch came to pit road to take on four tires, fuel and an air pressure adjustment on lap 383. He restarted in eighth with 12 laps to go.

● Busch battled hard over the final 12 laps of the race but had to settle for an eighth-place finish after a very strong run all race long.

“We had a good M&M’S Red Nose Day Camry. The car didn’t start off well, but Ben (Beshore, crew chief) and the guys kept adjusting on it, and we got it a lot better. There at the end, you try to get all you can on and off pit road to have a shot at the win, and I just came in there too hard and got the commitment box.”