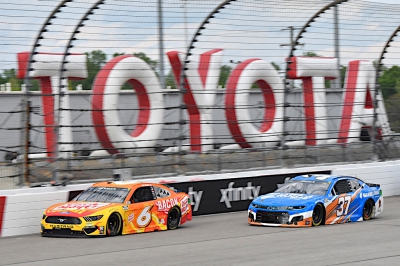 A spin halfway through stage two of Sunday afternoon’s 400-lap race from Richmond set Ryan Newman and the Oscar Mayer team back on a day where much of the field had difficulty passing. The No. 6 team battled back from the damage to ultimately finish 30th.

Just two non-stage cautions flew all day, with the first involving the Oscar Mayer Ford. The other came late in the action with 19 laps to go after several long green flag runs as only 14 cars finished on the lead lap, several of which took the wave around in the final break.

Newman started the day from the 19th spot and ended the first stage there, battling tight conditions in the middle of the corners with loose conditions on exit. After the team’s third stop of the day under green at lap 137 – the first stop of the second stage – Newman was on the outside of a three-wide scenario that saw the No. 6 spin off the front of the No. 33 machine.

The damage was mostly cosmetic on the left rear, but Newman lost a pair of laps in the sequence setting him back. He went on to finish the second stage in 32nd, and with just one final caution at lap 381 and two additional stops under green, was relegated to the 30th-place result.

Newman and the No. 6 team head to Talladega Superspeedway next weekend for 500 miles from the 2.66-mile track. Race coverage is set for 2 p.m. ET on FOX and MRN, and coverage can also be heard on SiriusXM Channel 90.