Kyle Busch A ‘Nose’ for Victory at Richmond 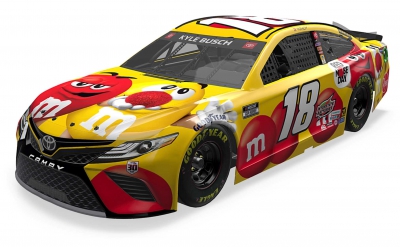 In addition to his six career wins there, the stat sheet for the driver of the No. 18 M&M’S Red Nose Day Toyota Camry for Joe Gibbs Racing (JGR) also shows 18 top-five finishes and 23 top-10s in 30 career starts there, making him the most consistent active drivers at the track located in the “Capital of the Commonwealth of Virginia.”

Additionally, the Las Vegas native is tops among active drivers with his average Richmond finishing position of 6.8. Next best there is Kevin Harvick’s average finish of 7.9. Busch has completed all but one of the 12,029 laps available to him in his 30 Richmond starts. Of those laps completed, Busch has run in the top-15 for 10,691 laps, or 88.9 percent, which ranks second to Harvick’s 93.0 percent among active drivers.

Busch will have the familiar M&M’S Red Nose Day scheme on board for Sunday’s Toyota Owners 400, the scheme that went to victory lane with Busch at Kansas Speedway in Kansas City in May 2016. Red Nose Day is a campaign with the mission to end child poverty by funding programs that keep children safe, healthy, educated and empowered. M&M’S has raised more than $7 million for Red Nose Day with the racecar scheme elevating the awareness among race fans each year since 2015. Fans can grab a digital Red Nose at RedNoseDay.org and Walgreens.com, with the money raised going to help kids around the world.

Busch and the M&M’S Red Nose Day team look to get back to victory lane at Richmond where, in addition to the 2018 sweep of the spring and fall races, Busch also won four consecutive Cup Series spring races from 2009 to 2012, besting Richard Petty’s previous record of three Richmond spring-race wins in a row from 1971 to 1973.

With those impressive statistics and records to back him up, it’s little wonder that a visit to the Virginia capital is one of Busch’s favorite stops on the NASCAR tour.

So, as the series heads to Richmond for the first time this season, Busch and the M&M’S Red Nose Day team hope to follow their noses to victory lane yet again with their seventh Richmond victory.