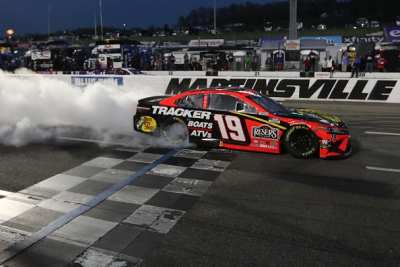 The Nascar Cup Series returned to its most traditioned track this weekend with yet another twist that has helped make this “the best season ever”. What was touted as the first ever night race for the half-mile paperclip became the “24 hours of Martinsville”.

The race was delayed over an hour due to rain, but NASCAR was determined to throw the green flag Saturday night even as rain came down during pre-race ceremonies. Denny Hamlin quickly jumped out to the lead, but the cars only managed 42 laps before the race was postponed to the next day due to weather.

Martinsville roared back to action Sunday afternoon with Hamlin out front where he would be most of the day trading the spot back and forth with Ryan Blaney. The two would combine to lead 433 of the 500 laps.

Blaney bested Hamlin for the stage one victory, but Hamlin would take the lead on the restart although that did not last long. 35 laps into the run Blaney put the #12 Ford back out front where he would run throughout stage two. Hamlin made a run for the stage victory giving Blaney a small bump in turn four and making a run to the inside as the two sprinted down the front stretch, but again it was Blaney getting the best of the Veteran.

Strategy came into play during the final stage as teams were on different pit schedules separating the previously dominant Hamlin and Blaney allowing for some other drivers to get a taste out front. William Byron, Christopher Bell, and Bubba Wallace would all find opportunities to lead the race.

Contact between Kyle Busch and Chris Buescher on lap 386 led to a huge pile up turning the back stretch into a junk yard taking out several championship contenders and sentimental favorites. The race would be red flagged for cleanup, at least track workers didn’t have to sweep any dirt or grass.

The race continued with Hamlin and Blaney battling once again for the lead. After a caution with 50 laps remaining the leaders all pit for service. Unfortunately, Blaney’s car caught an air hose leaving the pit box resulting in a penalty and relegating the #12 Ford to start at the rear of the field. Blaney rally back to finish a disappointing 11th with one of the fastest cars in the field.

Martin Truex Jr. won the race off pit road however Hamlin showed his dominance again on the restart taking the lead. Not to be out done by his teammate Truex made an exceptionally clean pass with 15 laps remaining. He would hold onto the lead to score the Victory.

This was Truex’s third win in his last four races at the track and he is now the first repeat winner for 2021; this is his 29th career win.

The Nascar Cup Series returns to the track on Sunday, April 18th at 3:00PM ET for the Toyota Owners 400 at Richmond Raceway.