Buescher Bounces Back to a 13th-place finish at Martinsville 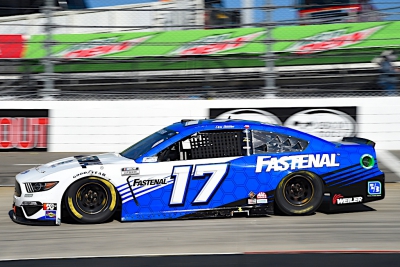 After sustaining major damage in a multi-car pileup in the final stage of racing, Chris Buescher and the No. 17 Fastenal Ford team bounced back to finish 13th Sunday afternoon at Martinsville Speedway.

“Good night at Martinsville for our Fastenal Ford Mustang team,” Buescher said. “The team did a really good job fixing stuff when we needed it to be fixed. It wasn’t the smoothest, but we got it done. At the end of the day, we had a pretty decent run here. I’m happy with how we got better at the end.”

Buescher rolled off the grid 15th on Saturday night and took several caution laps as the track continued to dry before going green. In just 15 short laps, Buescher gained three spots to take over 12th where he held steady until a caution at lap 36. Soon after pit stops cycled through, the race was red flagged for inclement weather and postponed to Sunday afternoon. When the race restarted, Buescher fired off 14th, but was quickly shuffled back to 17th, holding track position long enough to finish the stage in the same spot.

At the stage break, the team pitted for fuel, four tires, and adjustments to restart 17th. For the majority of the stage the driver shuffled from 17-20th, going a lap down around lap 217. When the caution flag waved with 20 to go in the stage, Buescher received the free pass. The team pitted for tires and fuel and got back on track for what would be a two-lap shootout to end the stage. Buescher took the green-white checkered in 14th for stage two.

The Prosper, Texas native pitted for four tires and fuel to restart 18th for the final stage of racing at Martinsville. Shortly after the race went back to green, a caution came out at lap 277. The No. 17 team returned to pit road for fresh tires and more fuel to then restart 20th. Not long after going green, another caution flag waved and Buescher stayed out on track to secure a fifth-place restart position. The driver stayed inside the top-10 and was running ninth when yet another caution flag waved at lap 321. About four laps after the team’s pit stop and restart, the 10th caution of the race came out. Pitting with the last caution, Buescher stayed out for track position to restart 10th.  A couple more caution flags waved but the driver continued to drive in and around the top-10, never falling below 15th. With 123 laps to go, Buescher was running 14th when he was involved in a multi-car pileup that sent the race to red. Fortunately, when the race returned to yellow the No. 17 team was able to repair most damage after three trips down pit road. When the race returned to green, Buescher restarted 17th, but held track position, looking for an opportunity to move forward. With just 13 to go, the driver made it up to 15th and gained two more spots to take the checkered flag in 13th.

Buescher and the No. 17 team return to Virginia as they head to Richmond Raceway on Sunday, April 18th at 3 p.m. EST on FOX, MRN and SiriusXM Channel 90.