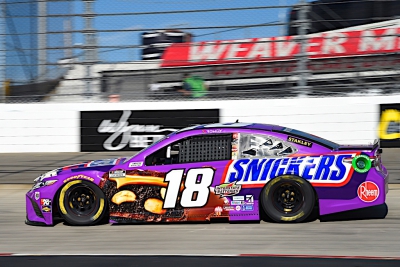 ● The SNICKERS Peanut Brownie driver quickly moved up to eighth by lap eight. The caution waved on lap 38, and Busch came to pit road on lap 39 to take on four tires and fuel. As he came off pit road still in eighth, the skies opened up, with too much rain for racing to continue on Saturday night.

● When the race restarted on Sunday afternoon, Busch rolled off eighth but fell to 11th toward the end of Stage 1, as he told crew chief Ben Beshore that his car was loose back to the gas in the corners.

● Busch came to pit road following Stage 1 on lap 134. He told Beshore his SNICKERS Peanut Brownie Toyota was too loose all the way through the corner. The No. 18 team made trackbar and air pressure changes and did them quickly, gaining Busch four spots off pit road to restart Stage 2 in the seventh spot.

● Busch took the strong pit stop – the second fastest by any pit crew thus far this year – and headed farther to the front. He found himself all the way up to fourth by lap 154 and running fast lap times.

● As the long run went on, Busch’s car began to build loose, and he fell to eighth by lap 220.

● There was a caution with 15 laps to go in the stage. Over the course of two restarts, Busch fell to ninth, where he ended Stage 2.

● Busch elected to come to pit road following Stage 2, taking on four tires and chassis adjustments. He restarted in 15th for the final stage, with a mix of drivers who elected to pit and stay out following the stage.

● The SNICKERS Peanut Brownie driver started farther back in the field to start the final stage, but an unknown handling issue dropped him to 20th by lap 311.

● Things went from bad to worse. Busch radioed Beshore to tell him he felt “something might be broke,” and a few laps later he spun on lap 321, bringing out the caution. Busch came to pit road the following lap and then made another stop to try and diagnose the problem, restarting 25th on lap 334.

● Beshore called Busch to pit road on lap 373, but an issue on the left front caused a lengthy stop, and Busch came off pit road all the way back to 24th.

● The SNICKERS Peanut Brownie driver quickly moved up to 18th by lap 385, but just one lap later he was spun by Chris Buescher coming off turn two, causing a 10-car pileup and a red flag.

● After the red flag was lifted, the No. 18 team went to work to cut off pieces of the front nose and fix the damage as much as possible. Busch restarted 20th at the tail end of the longest line after the team came in for multiple stops to fix the damage.

● The two-time Cup Series champion made one more charge through the field, moving up into the top-10 with 10 laps to go to bring home an unlikely top-10 after a more than eventful race.

“It was such an up and down day. Our SNICKERS Peanut Brownie Camry was good, we just kept getting behind on track position and just kept working to try and make it back up. At one point in the race I thought something had broke. The handling fell off the car so quickly, but the car was better once we put the next set of tires on. The guys did a good job fixing the damage, we dug in and salvaged a top-10 out of it.”

The next event on the NASCAR Cup Series schedule is the Toyota Owners 400 on Sunday, April 18, at Richmond (Va.) Raceway. The race begins at 3 p.m. EDT with live coverage provided by FOX and SiriusXM NASCAR Radio.