Custer Soldiers to 18th at Martinsville 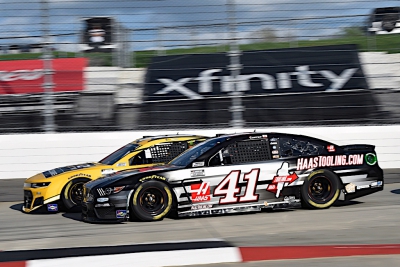 ● The HaasTooling.com Ford held its relative position from the start of the race and was running 25th when the caution flag flew for a single-car incident on lap 38. Custer reported he started out too free and struggled with forward drive, and then got too tight once the rubber began to be laid down on the green racetrack. He pitted for four tires and a track bar adjustment and spring rubber added to the right rear. No fuel could be added since the caution occurred before the schedule lap-60 competition caution.

● The race was red-flagged for weather on lap 42 and restarted Sunday afternoon with Custer in 25th place. He remained in that position until the yellow flag flew for a single-car spin on lap 51. He stayed on track and restarted 25th on lap 57.

● The originally scheduled competition caution on lap 60 was rescinded, and Custer ran to the end of the stage, crossing the line 27th. After reporting his main problem was lack of drive off the corner, he received a right-rear spring rubber and track bar adjustments during the stage break.

● The HaasTooling.com Ford Mustang continued to struggle with forward drive off the corner throughout the stage. Custer continued to hold his relative position and was running 30th when the caution flag flew for a single-car incident on lap 241. The team opted to stay on track to get the wave-around to within one lap down and work to maintain track position during the closing laps of the stage. Custer restarted 29th when the race went back to green on lap 247.

● A two-car incident on lap 251 brought out the caution flag once again with Custer still running 29th. The team this time elected to bring him down pit road for fresh tires and fuel. The HaasTooling.com Ford restarted 28th on lap 257, and that’s where Custer crossed the line when the stage ended three laps later. Custer said his Mustang felt the best it had all day during that three-lap run. He stayed on track during the break.

● The No. 41 HaasTooling.com Ford Mustang picked up a position in the short run to the next caution flag for a single-car incident on lap 277. Custer said the recent changes were taking his racecar’s handling in the right direction, that he wished to get more of the same. He stayed on track once again and restarted 25th and in the Lucky Dog position on lap 282.

● When the caution flag flew once again for a single-car incident on lap 289, Custer received the free pass back to the lead lap. He pitted for four tires, fuel and track-bar adjustments, and restarted 24th on lap 296.

● Custer moved up to 23rd by the time the caution flag flew on lap 321 for a single-car spin in turn two. He said his HaasTooling.com Ford was now getting tight. He pitted for four tires, fuel and a left-rear track-bar adjustment and restarted 19th on lap 326. He picked up a position before the caution flag flew for a multicar incident behind him just two laps later. Custer stayed on track and restarted 17th on lap 335.

● It was another short run to the next caution for a multicar incident in turn two on lap 340, and Custer’s HaasTooling.com Ford made slight right-front contact trying to get through the melee. He came down pit road for fresh tires, for fuel and to pull bodywork clear of the right-front tire. Custer restarted 22nd on lap 347.

● A single-car spin and subsequent pileup in turn two brought out the caution flag two laps later. Custer emerged in 21st and restarted there on lap 355.

● The next caution flag flew on lap 371 for a single-car incident in turn two with Custer running 20th. He said his main issue was a tight condition. He pitted for four tires, fuel and air pressure adjustments and restarted 24th on lap 377.

● Custer was running 21st when he was caught up in a 15-car pileup on the backstraight on lap 386, which brought out the red flag. The only damage was to the left-rear quarter panel, which the team repaired once the race went back to yellow, and Custer restarted 17th when the race went back to green on lap 396.

● The caution flag flew on lap 451 for a single-car spin in turn three while Custer was running 18th. He said he needed his HaasTooling.com Ford to be tightened up a bit and asked for a little help with forward drive for the run to the finish. After pitting for four fresh tires and track-bar adjustment, Custer restarted 18th on lap 458 and took the checkered flag in the same position.

● The Blue-Emu Maximum Pain Relief 500 began on Saturday night and 42 laps were completed before rain washed over the .526-mile oval, forcing NASCAR to postpone the remainder of the race to Sunday.

● Martin Truex Jr. won the Blue-Emu Maximum Pain Relief 500 to score his 28th career NASCAR Cup Series victory, his first of the season and his second at Martinsville. His margin over second-place Chase Elliott was 1.972 seconds.

“That was a typical Martinsville race. It’s a long race, a tough race, a long two days, it felt like. Our biggest issue was trying to find the drive off the corners that we needed. We got our HaasTooling.com Ford pretty decent in that respect by the middle of the last stage. We managed to get through that big wreck in better shape than a lot of other folks, and for some reason the car got worse during the last run, but we were able to get 18th place out of it.”