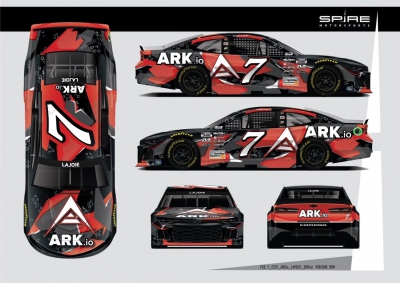 “I am extremely excited to sponsor Corey (LaJoie) for the fourth year in a row,” said Travis Walker, ARK Co-Founder. “We’re thrilled about his move to Spire Motorsports. I also support a late model program in the Midwest that runs the No. 7 so that’s a fun synergy between the two teams. I'm also very thankful for his manager as well, keeping everything running smoothly and allowing me to continue to help with designing the livery. I look forward to seeing Corey back on a short track and our continued relationship into his bright future in this sport.”

A blockchain is a digital record or ledger of transactions. The name comes from its structure, in which individual records and transactions are gathered and verified in large chunks, called blocks, once verified this block of transactions is linked together to the previous block forming a chain of blocks. Blockchains are used for recording transactions and are the underlying technology behind cryptocurrencies, such as ARK and Bitcoin. Blockchains have many other applications, as well.

“It’s awesome to have ARK.io back this weekend,” explained LaJoie. “I’m grateful to Travis and everyone at ARK for the support they’ve provided me, personally, over the last several years. He’s also a late model team sponsor and former kart racer, so he gets it. I appreciate that he continues to believe in me. ARK.io it the world’s simplest way to blockchain, so I’d urge anyone who may have a need for digital record keeping to consider ARK’s services. Statistically, Martinsville is one of my best tracks and it’s also the first true short-track race of the year, so I’m excited to see what my Spire Motorsports team can accomplish this weekend.”

Spire Motorsports jump started its 2021 campaign with a pair of top-10s in the Daytona 500 where Jamie McMurray and LaJoie finished eighth and ninth, respectively. Justin Haley returns to the seat of the team’s No. 77 Diamond Creek Water Camaro this weekend after veteran dirt racer and Camping World Truck Series regular Stewart Friesen handled the driving duties two weeks ago at Bristol Motor Speedway.

“We’re looking forward to having ARK.io and Diamond Creek Water on board our cars Saturday night at Martinsville,” added Spire Motorsports co-owner T.J. Puchyr. “We had a great start to the season at Daytona and everyone has been working hard to get better ever since. The team had a much-needed weekend off but I think everyone is itching to get back to the race track. When you think of NASCAR tradition, one of the first tracks that comes to mind is Martinsville. From my perspective, it doesn’t get much better than 500 laps on Saturday night.”

The Blue-Emu Maximum Pain Relief 500 from Martinsville Speedway will be televised live on FS1 Saturday, April 10 beginning at 7:30 p.m. Eastern Daylight Time (EDT). The eighth of 36 races on the 2021 NCS schedule will be broadcast live on the Motor Racing Network and SiriusXM NASCAR Radio Channel 90.