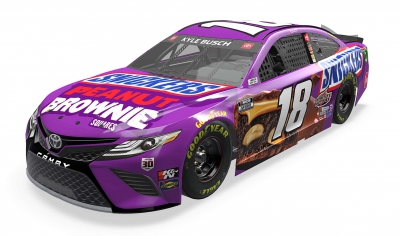 When Martinsville (Va.) Speedway installed lights starting in late 2016 to be used for the 2017 season and beyond, track officials had aspirations to one day run a NASCAR Cup Series race that started and ended under those lights. That vision became a reality in 2019 when it was announced that there would be a true night race in May of 2020, but the COVID-19 pandemic had other ideas. While the race did happen at night last season, instead of a Saturday night in May, it was run on a Wednesday night in June with no fans in the stands.

For 2021, fans, albeit a limited number of them, are finally able to see the first Martinsville Saturday night race and the first night points-paying race of the Cup Series season as NASCAR’s top series heads to the .526-mile short track for the 500-lap Blue-Emu Maximum Pain Relief 500.

Kyle Busch, driver of the No. 18 SNICKERS Peanut Brownie Toyota Camry for Joe Gibbs Racing (JGR), hopes to build on some impressive recent statistics at the Virginia short track. At the pinnacle of recent Martinsville success for Busch and the SNICKERS Peanut Brownie team is the two-time Cup Series champion’s first career win at the paperclip-shaped oval in April 2016. Not only did he bring home his first Martinsville grandfather clock trophy in the Cup Series, he did it in dominating fashion, leading five times for a race-high 352 laps en route to victory lane.

In fact, in his 11 starts there, Busch has two wins and two runner-up finishes among his eight consecutive top-five finishes from October 2015 through April 2019, making SNICKERS Peanut Brownie driver a staple at the front of the Martinsville field. The tight, tricky oval was a much bigger challenge for Busch earlier in his career, especially during his first years racing under the JGR banner. In fact, Busch finished outside the top-10 in three of his first four races there with JGR in 2008 and 2009, but has certainly come into his own there in recent years.

So as Busch and the rest of his NASCAR Cup Series competitors head to Martinsville for the first Saturday night race of the season, the two-time Series champion is hoping to be in the spot that will shine brightest – in victory lane with his first win of 2021.