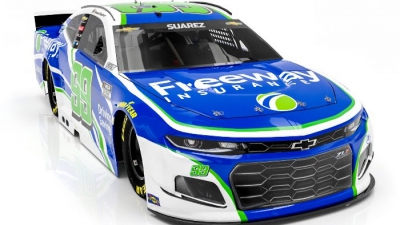 Trackhouse Racing announced today that Freeway Insurance, the largest auto insurance and personal lines distribution company in the U.S., will join the first-year NASCAR racing organization as a premium sponsor on its No. 99 Chevrolet Camaro and driver Daniel Suárez for the remainder of the 2021 NASCAR Cup Series season.

For the remaining 28 races, Freeway Insurance logos will adorn the lower quarter panel on the No. 99 Chevrolet, team uniforms, team transporter and pit equipment, as well as Suarez’s uniform and helmet. Freeway will also serve as the primary sponsor on the No. 99 at the Oct. 17 Cup Series race at Texas Motor Speedway in Fort Worth.

“We are proud to join Trackhouse Racing and further our relationship with Daniel Suárez as NASCAR fans are an ideal audience for our products and services,” said Cesar Soriano, Chief Executive Officer of Freeway Insurance, who hopes to create a national advertising campaign featuring Suárez.

“We were inspired by Daniel’s personal story as one of the world’s top stock car drivers, and by his performance on the track. We are thrilled to work with Daniel as a trusted ambassador of our brand.”

Suárez, 29, a Monterrey, Mexico native notably stands out as the only foreign-born national series champion in NASCAR history with his 2016 Xfinity Series title. Freeway has been a personal sponsor of Suarez’s in 2021.

“I am very excited to represent Freeway Insurance because they provide necessary services at affordable prices for those who need it most,” said Suárez who finished fourth in the most recent Cup race held at Bristol (Tenn.) Motor Speedway on March 29. “I love that the Freeway Insurance campaign will be in English and in Spanish and that Freeway is also putting our young team on a national stage with their advertising. That’s important as we continue to win over NASCAR fans.”

“We are patiently building this organization with a long-term vision and hard work,” said Trackhouse owner Justin Marks, whose team debuted in the 2021 Daytona 500. “We are honored Freeway Insurance chose to join us and we know the NASCAR community will embrace its participation with Trackhouse Racing.”

In January, Marks announced GRAMMY® Award-winning global superstar Armando Christian Perez (Pitbull) as a team co-owner. Pitbull was Grand Marshal at the Daytona 500 and attended the race at Homestead-Miami Speedway.

The team plans to amplify the sport’s influence around the world. Not only will Pitbull serve as an active partner on the Trackhouse executive team, but Pitbull will also serve as a brand and philanthropic ambassador. Together, Marks and Pitbull will foster the launch of a racing-themed STEM curriculum within the SLAM! (Sports Leadership Arts and Management) inner-city charter schools -- which Pitbull helped establish seven years ago.