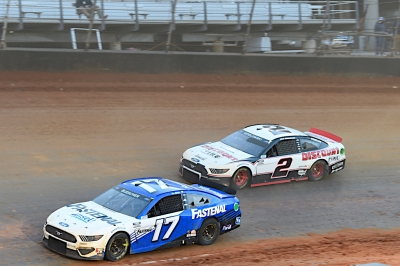 Chris Buescher ran for much of Monday’s delayed event on the Bristol dirt in the top-10, with his Fastenal Mustang advancing as high as sixth midway through the race. The Texas native picked up a stage point in the first segment, but a flat right rear tire midway through stage two halted his progress. He would ultimately finish 14th as he battled back from the damage.

With Saturday’s heat races rained out, NASCAR set the field by the formula it has used for other events this year. Buescher began the day from the 11th spot and would maintain that position during a chaotic opening green flag run. The first caution of the day on lap 40 for a pileup in turn 2 brought out a red flag, and Buescher sustained slight damage on the restart. Though he dropped just outside the top-15, another caution quickly flew and allowed cars to hit pit road for the first time in the event.

A unique feature of the event had teams perform controlled and timed pit stops, with three minutes to change tires and repair any damage with no positions to be gained or lost on pit road. The Fastenal team quickly corrected the fender damage and made adjustments to give the Ford Mustang more life on short runs.

The changes quickly paid dividends as Buescher vaulted to the 11th  position in just a few laps. As the end of stage one neared, he engaged in a back-and-forth battle with the No. 9 car for the 10th spot and the crucial stage point that came with it. With just over a lap to go in the segment, Buescher completed the pass and took the position at the stage break.

Another pit stop brought more slight changes to dial in the handling of the Fastenal Ford, and Buescher continued his forward momentum early. He was trying to make a pass for the 8th spot at lap 140 when contact with a competitor pinched his right rear fender. The damage slowly drained the life from his tire, and the driver did everything he could to keep the car on the track until the second competition caution of the day at lap 150. By then, he was scored 22nd as cars hit pit road once again.

Damage repairs and a fresh set of tires did the trick, as Buescher would continually pick off positions despite three more cautions displayed before the end of stage two. By that time, Buescher had advanced back to 14th and wouldn’t fall outside the top 15 the rest of the way.

The final 50-lap shootout nearly ran green the entire way until the final yellow of the day flew with just four to go, setting up a chaotic final restart and green-white-checkered finish. Buescher held serve on the restart, taking the checkered flag 14th.

With seven races in the books, NASCAR takes the upcoming weekend off for Easter, with Martinsville Speedway the next stop on the circuit. That 500-lap race from ‘The Paperclip’ is set for Saturday, April 10, at 7:30 p.m. ET on FS1. Coverage can also be heard on MRN and SiriusXM Channel 90.