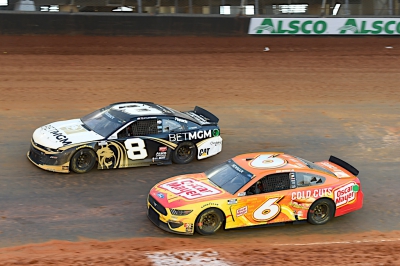 Ryan Newman earned his best finish of the young season and ran up front for nearly the entire race, picking up stage points in each of the two opening segments of Monday afternoon’s postponed Bristol Dirt Race. He finished fifth in the Oscar Mayer Ford Mustang, and earned a combined seven stage points along the way.

“That was fun, no doubt,” Newman said following the 250-lap race. “It was a good run for our Oscar Mayer Ford Mustang and a great team effort the entire week. I am really proud of the effort and a lot of guys got to see a lot more and experience a lot more. We got turned around there from a racing accident in turn 2 with the 24 and had to fight back and did. We just didn’t make it all the way back to the front. We had a pretty good car. I would have liked to see what we would have done with some track position but I am sure everyone else would say the same thing.”

An experienced dirt racer in his own right, Newman earned his first top five finish since late in the 2019 campaign, and has already matched his top 10 total from a season ago. The 43-year-old veteran spent much of the afternoon at or near the front of the field, as track position proved to be key throughout the unique format of the Cup Series’ first attempt at racing on dirt in 51 years. Heavy rain unfortunately cancelled Saturday’s heat racing action and ultimately proved to be too much for Sunday’s attempt at a race, pushing the event to Monday afternoon.

Due to the heat races being off the table, Newman began his afternoon from the 14th spot after the rule book and NASCAR’s formula set the lineup. He quickly charged forward, advancing up to eighth by the race’s first yellow at lap 40. He was the victim of the ensuing caution flag, as the No. 24 machine made contact on corner exit, sending him for a spin on the straightaway. With little fender damage, he restarted 14th after the competition caution at lap 50, but just a lap later was back inside the top-10.

He went on to maintain the eighth spot for the opening 100-lap stage, which ran caution free for the final 41 laps. Unique to Monday’s race were controlled and timed pit stops, meaning the field was frozen at each break, and no positions could be gained or lost on pit road. The No. 6 Oscar Mayer team took the first stage break to try and give Newman more forward drive on an otherwise decent-handling machine.

He would restart eighth for stage two, which ran all green to the next competition caution at lap 150 where he ran fifth. From there, three successive yellows were displayed to the end of the stage, which saw Newman cross the line fifth, picking up five valuable stage points.

He lined back up fifth for the final 50-lap shootout, and the race looked to finish under a long green-flag run, until the yellow flew with just four to go to set up a chaotic green-white-checkered finish. He battled back from restarting seventh to take the checkered flag in fifth.

With seven races in the books, NASCAR takes the upcoming weekend off for Easter, with Martinsville Speedway the next stop on the circuit. That 500-lap race from ‘The Paperclip’ is set for Saturday, April 10, at 7:30 p.m. ET on FS1. Coverage can also be heard on MRN and SiriusXM Channel 90.