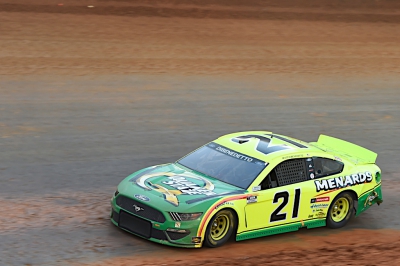 Matt DiBenedetto and the No. 21 Menards/Quaker State team recovered from a pre-race penalty to finish 13th in the inaugural Food City Bristol Dirt Race.

The race was postponed from Sunday to Monday afternoon due to torrential rains in the Tennessee mountains, and DiBenedetto was set to start 12th. But a miscue unloading the Menards/Quaker State Mustang from the team hauler caused some fender damage, which is considered by NASCAR to be an unapproved adjustment. The penalty for any change to the car prior to the start of the race is moving to the rear for the initial start.

Once DiBenedetto took the green flag, he set about working his way forward. Despite the dusty conditions that limited his visibility throughout the race, he was up to 24th by Lap 49, when the caution flag flew for a multi-car crash just ahead of him.

Having escaped damage there, he continued his climb, and was up to 16th place at the end of the first 100-lap Stage.

In the final 50 laps, he ran as high as 11th before taking the checkered flag in 13th place. It was his fourth finish of 16th or better as he and the No. 21 Menards/Quaker State team continue to bounce back from a disappointing start to the 2021 season.

“We started last and got a decent finish,” DiBenedetto said. “I’ll take it.”

DiBenedetto said his spotter Doug Campbell  deserves much of the credit for keeping him out of harm’s way throughout the race.

“I need to give a big shout out to Doug,” he said. “As dusty as it was, he did an excellent job of looking ahead and keeping us out of trouble.”

Eddie Wood seconded DiBenedetto’s comments, adding that the driver/spotter combo did a commendable job missing the mayhem around them.

“It seemed like most every crash happened right in front of Matt or beside him,” he said. “I was happy to get through the race with no damage.”

DiBenedetto said that while there were issues with dust on Monday, he believes that with some changes future dirt races at Bristol will be improved. Track officials announced on Monday that the dirt would return next year.

“It would help to run it at night,” DiBenedetto said.

DiBenedetto and Wood also offered congratulations to their fellow Ford teammates at Team Penske, who now have won on consecutive weekends – Ryan Blaney at Atlanta and Joey Logano at Bristol.

After taking a week break for Easter, DiBenedetto and the No. 21 Wood Brothers team will return to action at the Woods’ home track, Martinsville Speedway, on Saturday night, April 10.