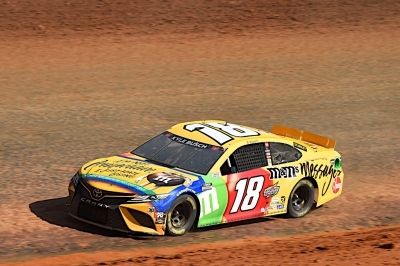 ● Busch moved up into the lead on lap two, but the M&M’S Messages driver found trouble soon after when mud caked on his grille spiked the engine’s temperature. He was forced to pit from the lead on lap 11, putting him one lap down.

● Busch came to pit road on lap 42 so the M&M’S Messages crew could add water to cool the engine. He restarted in 39th, one lap down.

● The two-time Cup Series champion got his lap back when the caution waved on lap 48, as he was the Lucky Dog after the lap-50 competition yellow. Busch found himself restarting in 32nd on the lead lap when racing resumed on lap 51.

● Busch was able to move up through the field when green-flag racing resumed. He was up to 17th by lap 70 and finished Stage 1 in that position.

● Busch found trouble early in the stage. With the car of Ryan Blaney bobbling ahead, Busch had limited visibility and ran into the back of Blaney, causing a multicar accident.

● Multiple trips down pit road necessitated cutting sheet metal from the M&M’S Messages Toyota, and Busch found himself in 23rd as the laps wound down on Stage 2. He finished 23rd.

● The two-time Cup Series champion rolled off 22nd for the final stage with a damaged M&M’S Messages Toyota.

● Despite the damage, Busch was able to move up through field. He found himself in the 18th spot with 20 laps to go and brought home a 17th-place finish.

“We had a good M&M’S Messages Toyota. I was able to get out front, but then we had too much mud on the grille and overheated, and it got us behind. I was able to get back on the lead lap, but when you get back in the pack like that, it was really hard to make up a lot of ground. We’ll put this one behind us, take the week off and get ready for Martinsville.”