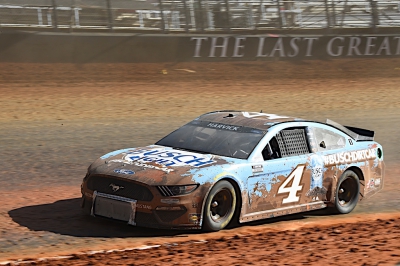 ●  The No. 4 Busch Light Ford Mustang was running ninth when the race’s first caution happened on lap 42. While the cars were stopped on the frontstretch with the race red-flagged for cleanup, Harvick reported that he was lacking forward drive.

●  The right-rear fender of Harvick’s Busch Light Ford Mustang was heavily damaged after contact on lap 49 that resulted in the second caution of the race, and it also served as the competition caution. The team made its first pit stop for four tires, fuel and repair work, along with adjustments to help with the car’s forward drive. Harvick restarted 12th on lap 51.

●  On lap 54 the yellow caution flag waved once more after several cars came together exiting turn two. Harvick sustained additional damage to the right side of his Busch Light Ford Mustang and pitted for repairs before returning to the track in 29th.

●  Harvick advanced to 20th before the end of the stage on lap 100. The Busch Light team pitted for four tires, fuel and adjustments.

●  The No. 4 Busch Light Ford Mustang climbed to 15th before the lap-150 competition caution. Harvick stopped on pit road for fresh tires, fuel and adjustments to give his car more drive off the exit of the corners.

●  The race retuned to green on lap 152 with the Busch Light Ford Mustang running 15th. The caution flag was shown quickly when the group of cars running behind Harvick were collected in a cloud of dust on the frontstretch on lap 154. Harvick lined up 13th for the restart on lap 159, but the field was once again slowed by the yellow flag as cars again made contact on the restart.

●  Under caution on lap 187, Harvick radioed that his Busch Light Ford Mustang was free getting into the center of the corner, and crew chief Rodney Childers remarked that track conditions were changing so fast it was hard to tell how adjustments were affecting the handling of the car.

●  Harvick maintained his 13th position through the final 10 laps of the stage. During the No. 4’s visit to pit road, the Busch Light team elected to adjust the stagger back to what it was at the start of the race to better prepare for changing track conditions.

●  NASCAR watered the upper groove of the track prior to going green again and Harvick slipped back to 17th on the restart.

●  A final caution on lap 247 gave Harvick one last chance to advance his position. The three-lap shootout to the finish allowed the Busch Light team to secure a top-15.

●  This was the first dirt race in the NASCAR Cup Series since Sept. 30, 1970 at the North Carolina State Fairgrounds in Raleigh where NASCAR Hall of Famer Richard Petty took the 117th of his record 200 career NASCAR Cup Series wins.

●  Joey Logano won the Food City Dirt Race to score his 27th career NASCAR Cup Series victory and his first of the season. His margin over second-place Ricky Stenhouse Jr., was .554 of a second.

●  This was Ford’s 707th all-time NASCAR Cup Series victory and its third win of 2021. It is the manufacturer’s 101st all-time dirt victory, with Logano being the 30th different driver to win a Cup Series dirt race in a Ford. NASCAR Hall of Famer Ned Jarrett, who is Ford’s all-time leader in Cup wins with 43, also holds the record for most dirt wins for Ford with 26.

●  Only 19 of the 39 drivers in the Food City Dirt Race finished on the lead lap.