Dillon Finishes 26th on the Dirt at Bristol 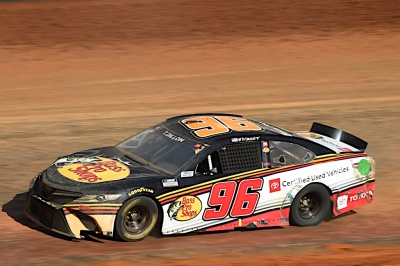 ● During the competition caution on lap 50, Dillon pitted for four tires, fuel and a track bar adjustment.

● “Car’s getting loose,” Dillon reported on lap 87 while running 19th.

● He held steady in 19th through the end of the stage.

● “When I hit the bumps, I get too tight,” Dillon said at the conclusion of the stage.

● The No. 96 pitted for four tires and fuel, along with tire pressure and track bar adjustments, at the end of the stage.

● During the competition caution on lap 151, Dillon pitted for four tires, fuel and a right-rear wedge adjustment.

● Dillon kept his No. 96 Bass Pro Shops Toyota Camry clean on a series of restarts, climbing to 18th by lap 169.

● During a caution on lap 187, Dillon said it was “hard to get his car to continuously turn.”

● He fell to 19th by end of stage. “I’m too tight,” said Dillon to crew chief Dave Winston.

● The team pitted for four tires and fuel, along with a tire pressure adjustment and a left-rear wedge adjustment.

● The No. 96 Bass Pro Shops Toyota Camry fell back a bit on the restart, but Dillon steadied it and was 25th by lap 230.

● While under caution on lap 247, Dillon said, “Fired up way, way tight for whatever reason.”

● Dillon came out unscathed from a green-white-checkered finish to post a 26th-place result.

● This was the first dirt race in the NASCAR Cup Series since Sept. 30, 1970, at the North Carolina State Fairgrounds in Raleigh where NASCAR Hall of Famer Richard Petty took the 117th of his record 200 career NASCAR Cup Series wins.

● Joey Logano won the Food City Dirt Race to score his 27th career NASCAR Cup Series victory and his first of the season. His margin over second-place Ricky Stenhouse Jr. was .554 of a second.

“I think the event was fun, for sure. It was unique, and I think we’re all still learning what it takes to run this event, whether it’s the teams or the track. We were running well, we were in the top-10, top-20, all day, which was really nice, and I think we just missed it a little bit on our last adjustment. You get bobbled out of place one time and you lose all your spots. It’s just unfortunate we ended up not where we ran all day. That’s a bummer, but all day we ran in a good position, where we should’ve been running. It’s a positive. We learned a lot. When we come back, I think we’ll definitely have a chance at improving that spot. I thought managing your tires would help, but it didn’t seem to help lap times if you saved your tires. Whether you burned them off or saved them, it didn’t seem to help the grip in the car and the speed. Definitely a lot of learning this weekend. When we come back, we’ll be massively improved.”

While the next event on the NASCAR Cup Series schedule is the Blue-Emu Maximum Pain Relief 500 on Saturday, April 10, at Martinsville (Va.) Speedway, Gaunt Brothers Racing’s next race is the Geico 500 on April 25 at Talladega (Ala.) Superspeedway.