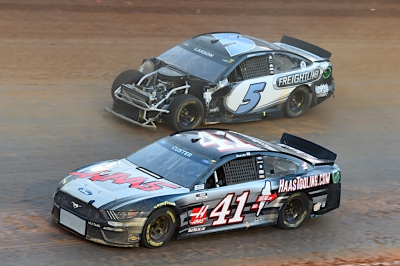 ● The HaasTooling.com Ford climbed as high as 16th from the drop of the green flag and held that relative position for a majority of the run. Custer dropped a pair of positions by lap 29, then radioed that the water temperature was steadily climbing as a result of mud accumulating on the grille. He backed off the pace and fell to 22nd when a five-car accident behind him on lap 40 brought out the red flag.

● During the red flag, Custer said his handling “started out tight, then got way too loose – we need to go big on the changes (during the lap-50 competition caution).” He restarted 21st when the race went back to green on lap 45.

● Custer dropped a pair of positions on the way to the first competition caution, which arrived a lap early when the yellow flag flew on lap 49 for a four-car incident. He pitted for tires, fuel and wholesale chassis adjustments during the three-minute, noncompetitive round of pit stops and restarted 23rd on lap 51.

● Another incident involving six cars ahead of Custer brought out the caution flag on lap 53, and Custer emerged in 19th. He said the HaasTooling.com Ford was turning well but it needed to be tightened up a bit and the right rear “gripped up.” He restarted 17th on lap 59.

● The stage stayed green during its final 41 laps, during which time Custer dropped six positions. He said his HaasTooling.com Ford started out a bit free and he burned off the right-rear tire as a result of it. He asked for the car to be tightened up a bit during the stage break but to not go too big on the changes.

● The HaasTooling.com Ford held its relative position for the entire green-flag run to the lap-150 competition caution. Custer said he still needed to be tightened up and that he needed to further address the issue of right-rear grip on corner exit. He took four tires and fuel and major chassis adjustments during the pit stop and restarted 23rd on lap 151.

● An eight-car incident in front of Custer brought out the caution flag one lap later, and he emerged 20th. Custer said his car felt a little free during the opening green-flag lap. Crew chief Mike Shiplett said the crew would make a wedge adjustment during the stage break. Custer restarted 20th on lap 158 and picked up a position when a spinning car ahead of him brought out another caution. He restarted 19th on lap 169.

● Custer was fighting a loose condition during the ensuing run. He dropped to 25th by the time the caution flag flew for a single-car spin on lap 185. The race went back to green on lap 191 for a final, nine-lap sprint to the stage break, and Custer held position. He said he needed a lot of help generating grip and subsequently speed on the straightaways. He pitted during the break for four tires, fuel and right-rear chassis adjustments.

● The No. 41 HaasTooling.com Ford Mustang held its relative position for the duration of the stage, which saw its only caution flag fly for a single-car incident on lap 245, five laps before the scheduled race distance, and sending it into overtime. Custer picked up one position during the stage.

●  This was the first dirt race in the NASCAR Cup Series since Sept. 30, 1970, at the North Carolina State Fairgrounds in Raleigh where NASCAR Hall of Famer Richard Petty took the 117th of his record 200 career NASCAR Cup Series wins.

● Joey Logano won the Food City Dirt Race to score his 27th career NASCAR Cup Series victory and his first of the season. His margin over second-place Ricky Stenhouse Jr., was .554 of a second.

● This was Ford’s 707th all-time NASCAR Cup Series victory and its third win of 2021. It is the manufacturer’s 101st all-time dirt victory, with Logano being the 30th different driver to win a Cup Series dirt race in a Ford. NASCAR Hall of Famer Ned Jarrett, who is Ford’s all-time leader in Cup wins with 43, also holds the record for most dirt wins for Ford with 26.

● Denny Hamlin remains the championship leader after Bristol with a 58-point advantage over second-place Logano.

“It was so cool to be a part of something this historic. It was definitely uncharted territory to put our Cup cars on dirt. But everybody did their best to adapt to everything that happened throughout the weekend, and I think the fans got a new kind of show. Looking forward to taking what everybody learned this weekend and making everything better for when we come back next year. I think our HaasTooling.com Ford team did its best to deal with everything that was thrown at us. Our biggest issues turned out to be trying to find forward bite on the straightaways and finding ways to tighten up the car. We now have a notebook to work with for next time.”