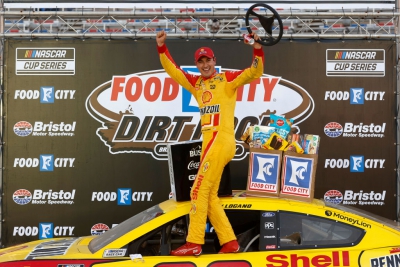 After a washout on Sunday, the NASCAR Cup Series was forced to run the Food City Dirt Race on Monday. It was ultimately Joey Logano who was able to capture the checkered flag in NASCAR’s return to dirt. Logano led 61 laps en route to his first win of the season.

“Man it's incredible. How about that guys! This is incredible. Man we did a lot of work in the dirt department here in the last couple weeks,” Logano told FOX Sports post-race.

“I was getting nervous because there were so many new winners and first time winners, so I told my guys we had to win.”

Due to heat races on Saturday getting canceled because of rain, NASCAR set the lineup by the formula. Kyle Larson was supposed to start from the pole, but an engine change on Friday forced him to go to the back on pace laps. Other drivers who had to drop to the back on pace laps included Michael McDowell and Matt Dibenedetto; both for unapproved adjustments.

Kyle Busch pounced on Denny Hamlin at the start to steal the lead by the end of lap one. On lap eight, Busch had to make his way to pit road for an overheating issue. On lap 40, Anthony Alfredo slammed into the wrecking Aric Almirola right in front of Truex Jr. “Holy crap that was close,” Truex Jr. told crew chief, James Small.

Corey Lajoie and Shane Golobic were also involved in this incident, ending both of their days. Seven laps later, William Byron tagged the left rear quarter panel of Ryan Newman and spun Newman around. This caution served as the competition caution.

Two of the favorites for the race, Christopher Bell and Kyle Larson, took eachother out on lap 52 collecting Ross Chastain. Bell and Chastain both took their cars to the garage and Larson was never able to make his way back to the front. On the ensuing restart, Alex Bowman couldn’t get going and he told his team, “I’ve got no fourth gear.” Bowman fought throughout the race without fourth gear, rallying for a 22nd place finish.

The remainder of the stage stayed green and Truex Jr. was able to win stage one by 2.6 seconds over William Byron.

On lap 135, Daniel Suarez made his way to the back bumper of Truex Jr. and made a pass for the lead. The second and final competition caution flew on lap 150 with Suarez still leading and Byron in second.

Chase Briscoe wrecked off of turn four in a similar fashion to what was seen in the caution prior. The dust was creating a huge challenge for these drivers and making it extremely hard to see. Kyle Busch said, “I can’t see anything. Not even the car right in front of you.” After that incident, NASCAR made the restarts single-file.

Cody Ware was the cause of the ninth caution when he wrecked by himself in turn two on lap 185. Joey Logano was able to get a jump on the restart, passing Suarez en route to the stage two victory. NASCAR took this break to do track-prep in an effort to reduce the amount of dust being stirred up.

With 35 to go, Bubba Wallace came down into Ricky Stenhouse Jr. causing Wallace to blow a tire from the seventh position; the race stayed green.

The last yellow flag flew with four laps to go as Mike Marlar spun out on the front-stretch while Logano continued to stretch his lead.

In overtime, Hamlin jumped to the outside but the move did not work as he lost second place to Ricky Stenhouse Jr. Logano was able to put a big enough gap between himself and Stenhouse Jr. as he was able to become the seventh different winner in seven different races. Rounding out the top-five was Stenhouse Jr., Hamlin, Suarez, and Ryan Newman.