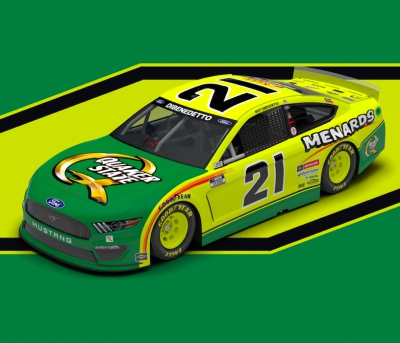 As he heads into this weekend’s Food City Dirt Race at Bristol Motor Speedway, the Cup circuit’s first appearance on clay since 1970, Matt DiBenedetto is confident he’ll have a strong run in his No. 21 Menards/Quaker State Mustang.

He’s basing that on his experience racing on dirt early in his career, when he was racing Outlaw Karts on northern California dirt tracks like Cycleland Speedway in Chino and the track in Red Bluff, Calif.

DiBenedetto is one of several drivers, including his fellow Cup competitors Kyle Larson and Tyler Reddick, who learned their craft on those tracks in their native California.

Although DiBenedetto hasn’t done as much dirt racing since he joined the Cup Series as some of his peers, he believes he’ll adapt quickly once he hits the track at Bristol, which was covered in clay for this weekend’s NASCAR races as well as a host of support events.

“Any time I’ve hopped in a dirt car or a sprint car, it’s been like riding a bike,” he said. “It’s all come back to me pretty quickly.”

DiBenedetto said he didn’t pursue a ride in one of the Late Model races run at Bristol last week, as some Cup drivers did to prepare for this weekend. But he did follow the action, paying particular attention to how the racing surface was prepared.

“Watching it was valuable,” he said. “I feel pretty comfortable, especially since we have practice and heat races before Sunday.”

He said that one of keys to success will be keeping up with the changing conditions of the racing surface as the races progress. Dirt tracks usually lose moisture during an event, and some grooves will take on rubber.

“The track can change so much,” DiBenedetto said. “You have to continuously adjust your driving and keep up with what other drivers are doing.

“We’ll have to figure it out on the fly.”

This weekend’s race will be the first on dirt for many Cup teams but the 33rd dirt race for the Wood Brothers.

They have one dirt win, at Richmond Raceway in 1960 with Speedy Thompson driving. In their last race on dirt, on May 30, 1964, at Greenville-Pickens Speedway in South Carolina, Marvin Panch qualified the No. 21 Ford on the pole and led the first 55 laps before an encounter with the wall led to an 11th-place finish.

Leonard Wood, who was turning wrenches on the No. 21 at that time, said he had looked over some competitors’ cars that season and determined that the fastest ones had more arch in their rear leaf springs.

So he hammered some more arch into the springs on Panch’s car, polished them up, and reinstalled them.

In dirt races leading up to the pole-winning run at Greenville-Pickens, Panch went on quite a run, posting four second-place finishes and a third.

“We didn’t run as much dirt as Richard Petty and Ned Jarrett and some of those guys,” Wood said. “But we had some success with it. [Brother] Glenn ran really good on dirt.”

Glenn Wood was a regular competitor on the NASCAR Convertible circuit, which ran on more dirt tracks than asphalt ones.

He had five career wins in that series, two of them on dirt tracks – at Richmond in April of 1957 and at the Charlotte Fairgrounds track that fall, with Curtis Turner driving in relief for him.

Of Wood’s nine poles, four came on dirt tracks, including the pole for the final race of the Convertible Series, at the Charlotte Fairgrounds on Aug. 23, 1957.

Leonard Wood said that while racing has changed tremendously since the Cup Series last raced on dirt, some things about dirt racing are the same.

“You just have to have the talent to do it,” he said. “Some drivers can hang on without spinning out, and some just aren’t cut out for it.”