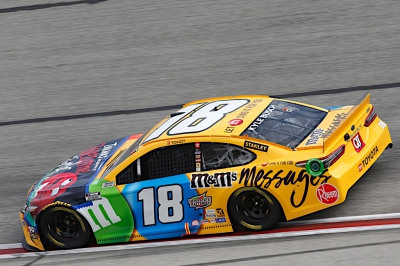 The NASCAR Cup Series heads to Bristol (Tenn.) Motor Speedway this weekend for its first of two racing events for 2021. However, this weekend is set to be different than any other time the series has competed there, for its half-mile, high-banked, concrete oval is now covered in dirt and NASCAR’s top series is set to compete on a dirt racing surface for the first time in more than 50 years during Sunday’s Food City Dirt Race.

For Kyle Busch, driver of the No. 18 M&M’S Messages Toyota Camry for Joe Gibbs Racing (JGR), one doesn’t have to dig too deep to find when he last competed on a dirt surface. In fact, it was just this past Friday and Saturday nights, when Busch took to the Bristol dirt oval behind the wheel of a dirt super late model for Double L Motorsports in the Karls Kustoms Bristol Dirt Nationals.

The Dirt Nationals appearance added to an already busy racing weekend for the two-time Cup Series champion, as he won the B-Main and finished 13th on Friday night at Bristol, then made a day trip down to Atlanta Motor Speedway Saturday to not only compete in the NASCAR Camping World Truck Series race for his own Kyle Busch Motorsports (KBM) team, but also brought home his 60th series victory. Following his Truck Series victory, Busch flew back to Bristol to compete in night two of the Dirt Nationals. The heats for Saturday night were conducted during the Truck Series race, so Busch was forced to make his way to the main event through the B-Main, and Busch did so by finishing in the runner-up spot. Busch then finished his busy day with an 11th-place finish in the main event but, more importantly, added some welcome experience on Bristol’s dirt oval in preparation for this weekend’s Cup Series race.

Busch capped off his weekend back at Atlanta with a fifth-place finish in Sunday’s Cup Series race.

While Busch has mostly a pavement racing background, he’s not a complete stranger to dirt-track racing. While he did run some dwarf cars, legends cars, and even modifieds on dirt as a kid growing up, he didn’t get back to the dirt until he participated in the Prelude to the Dream dirt super late model charity event at Tony Stewart’s Eldora Speedway in Rossburg, Ohio, from 2007 through 2012. In the final Prelude to the Dream event in 2012, Busch broke through and won against a strong field of competitors in a car prepared by dirt super late model stalwart Scott Bloomquist.

While dirt-track racing is a relatively new concept to NASCAR and its fans, they won’t be able to miss Busch’s familiar yellow No. 18 M&M’S Messages Toyota this weekend, with the scheme returning for the second weekend in a row. The message “I’m Not Competitive, I Just Hate Losing” will fittingly adorn Busch’s car this weekend, and he hopes NASCAR’s return to dirt will yield some strong results.

M&M’S Messages packs are featured in the beloved fan-favorite flavors – Milk Chocolate, Peanut, Peanut Butter and Caramel. Fans can find M&M’S Messages on shelves at retailers nationwide for a limited time, or they can order their favorite M&M’S Messages packaging design by visiting mms.com.

To further support the M&M’S Messages scheme, fans can tweet their favorite expression from one of 28 different M&M’S Messages packs available using the hashtag #MMSSweepstakes. The promotion, which will close at 9 a.m. EDT Sunday, aims to bring better moments and more smiles to the faces of M&M’S Racing and Busch fans across the country. As part of the promotion, select fans will be randomly chosen to win signed M&M’S Racing hats and diecasts, in addition to the grand prize – a signed piece of Busch’s No.18 M&M’S Toyota Camry.

So, as the Cup Series heads back to the dirt for the first time since 1970, Busch is hoping to send a message yet again that he means business by bringing home a historic win on Sunday afternoon.